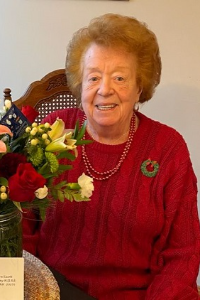 She was the beloved wife of Norman J. Escott, who passed away in 1998.

Born in Everett on November 29, 1936, she was the daughter of the late Lawrence Walsh and the late Mary (O’Malley) Walsh.

Barbara graduated from the Immaculate Conception parochial grammar and high school. She later attended the University of Lowell, where she received a B.S. Degree in Finance.

She was employed by the accounting department at Phillips Academy in Andover, the Mitre Corporation in Bedford and the NATO E3A Program at Hanscom Air Force Base in Bedford until her retirement in 2004.

While living in Tewksbury, Barbara was a communicant and former eucharistic minister at St. William’s Church.

She enjoyed golf, bowling as well as shopping for fine jewelry.