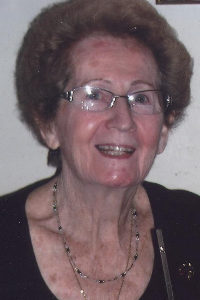 Mary F. Harkins, a longtime Woburn resident passed away peacefully, following a period of declining health, Monday, October 10, 2022, one day shy of her 87th birthday. She was the beloved wife of the late William Harkins. Born in Melrose she was the daughter of the late Owen and Helen (Rice) Short.


Mary will fondly be remembered as a devoted wife, mother, and grandmother. Her family was her primary focus in life and she was happiest when she was surrounded by those she loved. Mary was raised and educated in Melrose where she was a graduate of St. Mary High School. Once married, Mary and William settled in Woburn and together began their family. Over the years Mary had several small jobs mostly keeping mother's hours so she would always be home to care for the needs of her growing family. She enjoyed travel but mostly was devoted to her family. She will be greatly missed.


Relatives and friends are respectfully invited to attend a graveside service that will be conducted in Woodbrook Cemetery, 100 Salem St., Woburn, on Monday, October 17th, at 11 a.m. Arrangements by the McLaughlin - Dello Russo Family Funeral Service of Woburn.