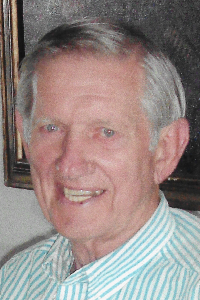 Elliott, J. Joseph of Wellesley, 95, died peacefully on October 7, 2022. He was predeceased in November 2021 by his wife of 69 years, Betty Ann Elliott. Joe and Betty Ann had two daughters, Joanne E. Reynolds (Mark Reynolds) of Natick and Carolyn Elliott-Farino (Greg Farino) of Portland, Maine. Joe was the proud grandfather of Michael, Brian (Michelle Mandino), and Kellee Reynolds, and Justin and Lila Farino. He also had two great-grandchildren, Evie and Riley Reynolds. Joe was also predeceased by his brother, Reverend William J. Elliott, S.J., of Weston.

Joe was born in Arlington and grew up in Belmont. He was an outstanding athlete, playing football, baseball, basketball, and hockey in junior and senior high school. He took delight in recounting how, as the president of the Belmont Class of 1944 and set to deliver the commencement address on June 6 – in which he was going to reference the impending D-Day invasion – he had to make last minute changes to the speech when he woke to the news that the invasion had already commenced. Upon graduation, Joe enrolled at BC and played football his freshman year, then enlisted in the Navy. The war ended before he had to go overseas, and he returned to BC to complete his bachelor’s and law degrees.

Joe was of the generation who, if they were lucky enough, worked for one employer their whole career; in his case, it was the New England Telephone Company. He was also lucky to retire at 60 after 35 years with NE Telephone.

Joe was an ardent fan of BC sports – and a loyal alumnus – and took his family to home football games at the Heights many a fall Saturday. He started playing golf seriously in his 30s and it became a passion for him, leading him to join the Charles River Country Club in Newton, where he twice served as president of the club and was a member for 56 years until his death. In his later years, Joe travelled several times to Ireland to visit relatives from both his father’s and mother’s families, as well as play golf. Joe and Betty Ann were parishioners at St. James the Great Catholic Church in Wellesley until the Archdiocese closed the church in 2004.