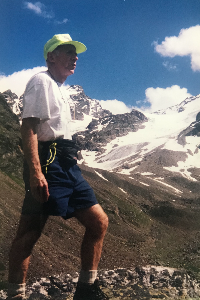 David A. Roberts, 82, of East Bridgewater, Massachusetts passed away on October 5 after a long journey with Lewy Body Dementia.

He was born in Holyoke, Massachusetts in 1940 to Frederick Roberts and Doris (Wilson) Roberts, and graduated from South Hadley High School where he met his wife, Ruth.

His interest in the outdoors and youth work led him to a degree in forestry at Paul Smith's College followed by a B.S. degree at Springfield College for Youth and Community Service. He worked as the Assistant Director at the Framingham Community Center, as an executive with the Boy Scouts of America, and as the Director of the Rockland Youth Commission. While working in Rockland, he earned a Masters of Education degree from Bridgewater State College. He then transitioned into the education field working for the Plymouth School System as a social studies teacher.

A lifelong runner, he ran road races far into his 70's. He was an early member of the Bridgewater Running Club and enjoyed volunteering with the Bridgewater Youth Track program.

He and Ruth were avid mountain hikers on both the east and west coasts of the United States. Their ultimate hiking experiences, however, were in the Austrian Alps.

A knowledgeable and passionate appreciator of classical music, he followed and supported the Boston Symphony through many conductors. Radio station WCRB provided the soundtrack for his daily life.

His forestry degree and time working for his father-in-law's tree service led to a general love of trees. He enjoyed both their study and identification, as well as the wildlife that inhabits them. His backyard birds and chipmunks received daily attention and never lacked for nourishment.

David was the beloved husband to Ruth for 59 years. He was adored by his children Steven Roberts (Annamaria) and Rebecca Roberts (Frank), and his granddaughters Brenna Roberts and Molly Roberts. He was a step-brother to the late Tom Driscoll and Neil Driscoll. David was a brother-in-law to the late Shelby and Leonard Warner, Linda and Douglas Young, and to Joan Farnsworth and her late husband, John. He is also survived by many nieces and nephews.

A celebration of life will be held at a later time.

Memorial contributions may be made to the Massachusetts Audubon Society.