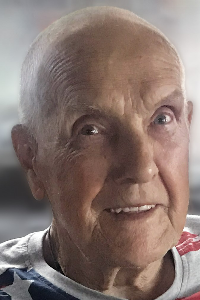 Born on March 29,1928, he was the son of the late Joseph and Mary (Chestercove) Hunchard, and was also a lifelong resident of Franklin, MA. He was a graduate of Franklin High School class of 1947.

Edward served in the Coast Guard from 1948-1951 during the Korean War, and attained the rank of Seaman First Class.

He was employed by the Town of Franklin DPW as a heavy equipment operator for 27 years, and then as the Grounds Manager for Dean College until his retirement in 1992.

Edward was a communicant of St. Mary's Church in Franklin, MA.

He is survived by his three sons, Mark of Mashpee, MA, Michael and his wife, Judy, of Uxbridge, MA, and Stephan and Katherine Dube of Franklin, MA. He was the brother to the late William, Joseph, Paul, and Francis Hunchard. He is also survived by close nephews, nieces, and cousins.

Also known as either "Ed", "Eddie", or "Uncle Eddie", he was a friendly man to everyone he met, and always had a twinkle in his eye. He had a fantastic memory with many stories to tell. Ed enjoyed gardening of any kind, which was evident by his manicured yard and abundance of vegetables that he grew each year in his garden. He was a handyman around his home and always managed to have a spare part, or two, on hand that could be used to make a repair. He also enjoyed hunting and fishing and was a lifetime member of the Franklin Rod & Gun Club. Ed was an avid New England sports fan as well. He will be missed by all that knew him.

A Memorial Service in his honor will be held at the Ginley Funeral Home, 131 Main Street, Franklin, MA on Friday, October 14th at 11 am. Burial will follow at St. Mary's Cemetery in Franklin.

In lieu of flowers, donations may be made in Ed’s memory to the Franklin Council on Aging, Franklin Senior Center, 10 Daniel McCahill Street, Franklin, MA 02038.