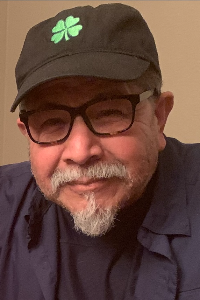 John was born, in Ventura, to Cruz and Mary Ramirez, on November 10, 1940. The oldest of 5 children, and only son. John grew up in Saticoy and went to Ventura High School, graduating class of 1958. While a Cougar, John played football, baseball, basketball and ran track. He was a proud Cougar and enjoyed attending Cougar football games throughout his life. John went on to Ventura College where he played football for the Pirates.

John coached football and baseball, at Ventura High School, as well as baseball at Saticoy Little League, also assisting next to his son, John Jr. for some time. It was never uncommon to run into someone he coached while out and about, he was always proud of the youth that he was able to impact while coaching and would often share fond memories of that time in his life, with the occasional story about the “good old days”.

John was married for 28 years, to Aurora Ramirez. During that time they had two children, John Jr., and 17 years later, Kaci. He began his career with Ventura County Animal Control, and moved onto various positions with the Teamsters Union Local 186, where he subsequently retired several years ago.

In his prime, John enjoyed biking, hiking, camping and fishing. He most enjoyed spending his free time in the Sierra’s. He passed this love onto his daughter, whom accompanied him on many tent camping trips, rain or shine/warm or cold. His later years were consumed with his grandchildren and great-grandchildren, whom were his greatest treasures. He loved telling stories and teaching them lessons about life. He never missed an opportunity to share some wisdom that he thought may help. For the past 10+ years, he primarily raised his great-grandson Cameron who was truly like a son to him. This was one of his greatest joys in his later years. He could have been doing what most people his age may do, but instead he embraced the role he had in Cameron’s life, as an honor and blessing. He always joked that he was definitely the oldest person in the school pick-up line, but in true John fashion, he quickly become fast friends with many of the other parents, who were more than half his age.

John was dedicated to his faith, and spent some time participating in the Knights of Columbus, Ventura, as well as attending Sacred Heart Parish, and Our Lady of Assumption.

John was a kind hearted, humble man, full of humility and love for his family and friends. He lived his life focused on the things that mattered most which was his family. He thoroughly enjoyed making people laugh, and would do so to any stranger he came across. John will be deeply missed by all who loved him.

The family would like to thank Deacon Don and the OLA staff for your compassion and support; Adrian Sanchez for his monthly magazine dedications; and all of his friends and family who reached out to show support during his recent brief illness. He loved you all so very dearly.

Viewing will be held, at Joseph P. Reardon Funeral Home & Cremation Service, Ventura, on October 13, 3pm-6pm; Rosary and Mass will take place, at Our Lady of Assumption Parish, on October 14, 10:15am; Burial and Reception to follow. Please RSVP for catering purposes, [email protected] or text 805.551.2815.