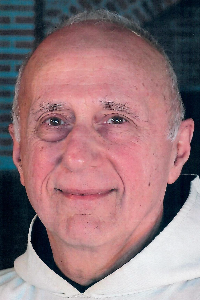 SPENCER – Father Gabriel Bertonière, ocso, a Trappist monk of St. Joseph’s Abbey in Spencer,
died very peacefully at St. Mary’s Health Care Center in Worcester on October 1, 2022. Born in
New Orleans, Louisiana, on January 17, 1932, to John A. Bertonière, Sr., and Hazel Montaldo, he
graduated from Jesuit High School there in 1948 and went on to study at Harvard University.
Immediately upon obtaining his BA cum laude from Harvard with a major in English in 1952, he
entered St Joseph’s Abbey, whose community had only recently transferred to Spencer after a
devastating fire destroyed their monastery in Cumberland, Rhode Island.
Father Gabriel made temporary profession of vows in 1954 and solemn vows in 1957, and he
was ordained a priest in 1958. In 1962 he was sent by the Abbot to Rome to continue his
theological studies. While in Europe he visited the monasteries of Mount Athos in Greece in
order to deepen his growing appreciation of the Eastern monastic tradition. Byzantine
Christianity and worship would become vital to his spirituality. In 1963 Fr Gabriel received his
Licentiate in Sacred Theology cum laude from the Oriental Institute in Rome. In 1965 he began
a long period of absence from the monastery. During this time he lived at the monastery of
Chevetogne in Belgium, prepared his doctorate at the Collegium Russicum in Rome, and taught
there for the extension program of an American university. He completed his doctoral
dissertation in 1970 cum laude and returned permanently to Spencer to resume his monastic
life in 1988. He is the author of several books, most prominently Through Faith & Fire: The
Monks of Spencer 1825-1958. After his return to Spencer, Fr Gabriel generously served his
brothers for many years in several key capacities, most significantly as archivist, novice master,
organist and choir master. He also served for a number of years as chaplain to our Trappistine
sisters at St Mary’s Abbey in Wrentham, MA.
The younger of two children, Fr Gabriel was predeceased by his parents, John and Hazel
Bertonière, as well as his sister, Yvonne Bertonière Calvo. In addition to his monastic brothers
at the abbey, he is survived by his dear and devoted cousin, Jonathan Montaldo, of Mantua, NJ,
and his cousin Noelie Pfisterer of New Orleans. The monks wish to thank the brothers and lay
staff at St Joseph’s Abbey Resident Healthcare Facility, the abbey’s infirmary, for the
benevolent and compassionate care they gave to Father Gabriel in his final years. Jonathan
Montaldo shares this reminiscence, which speaks volumes about the quality of Father Gabriel’s
life: “Gabriel and I were once in the infirmary kitchen with others, including Fr. Matthew, and
some monk remarked how close Gabriel and I seemed to be. Matthew said, ‘Close? They are
thick as thieves.’ Yes, but I was only a follower. Only Gabriel knew how to pull the heist of living
life full tilt.” There are no calling hours. Services and burial are private. J. HENRI MORIN & SON
FUNERAL HOME, 23 Maple Terrace, Spencer, is assisting arrangements.