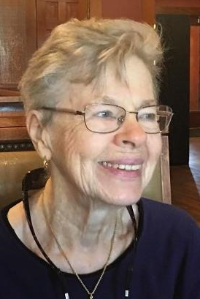 LYONS, Ann Stacia (Mara), 88, passed away peacefully on September 9, 2022, at her home in Norwood. Born and raised in Waltham, Massachusetts, she was a proud graduate of Waltham High School, Class of 1952 and then graduated from secretarial school. Ann began her career as an executive secretary first at General Electric and then at Honeywell. As a single, working woman she lived in Cambridge surrounded by close friends. She and her friends went on many travel adventures - Puerto Rico, Canada to ski and to New York City for Broadway Shows. In November 1966, she met John Michael Lyons at the Boston Public Library, they married in February 1967, and then John became her lifetime companion on all future travels.

The newlyweds first settled in West Roxbury and after their three children were born, they moved to Wellesley in 1974. While raising their children, she took part-time jobs to help support the family. She worked as the rectory secretary at St. James the Great Church and at Ara’s Men’s Clothing Store. When her children started college, she went back to work full-time as the secretary in the School of Nursing Office at Regis College. She retired in 1996 to take care of her elderly Aunt Marg and Uncle Ed.

A dedicated and wonderful mother to her three children, Stacia, John Michael, Jr., and Christopher. She encouraged and supported all their activities. She spent many weekends cheering and freezing at her sons’ football games but never really knew or cared what a 1st Down was or who won the game. Later she would trade the gridiron for a cold ice hockey rink to watch her grandson and granddaughter play hockey.

She loved and cherished each of her grandchildren. She would take them to the latest animated movies - we think she enjoyed the show more than the kids. Nana’s house always had yummy treats, secret stash of toys and a “little surprise” for each of them.
She adored and spoiled all her animals, especially the family dog, Casey. She was known to whip up Casey a batch of pancakes because she said he liked them.

When her husband retired in 1998, they traveled extensively throughout the US and Europe. She loved traveling by Amtrak secure in her knowledge that in the event of engine trouble her ability to walk far exceeded her ability to fly. She would approve of vacations to the beach - the Cape, Maine or Florida - in spite of her disdain for the sun, the sand and the water as long as all her meals were guaranteed to be at restaurants.

It was no secret to her family that she hated turkey - she would say her mother would make her a steak on Thanksgiving. After many years of going along with “tradition”, she displayed her iconoclastic streak when she replaced turkey and fixings with Chinese food for Thanksgiving Dinners at her house.
She loved sweets and was always up for anything that had lemon or coconut in it.
She was a firm believer in simple remedies - salt water, corn starch, baking soda, vinegar and Vicks Vapor Rub - to take care of almost anything. If she had known about all the tik tok hacks for cleaning with baking soda and vinegar, she would have rolled her eyes and said “they act like this is new, I’ve been doing this for years”.

She found pleasure in reading a good book. When her eyesight started to fail, she acquiesced to reading on a Kindle but didn’t love it. Her most favorite author was Jane Austen so much so that she became a member of the Jane Austen Society.

She had a great laugh and could find the humor in every situation. If she was in need of a pick me up, she would take a ride to Building 19 to browse the aisles and chuckle at all the ridiculous stuff for sale.

Ann always did the driving because her husband hated it, which meant she went her own way to get to a destination - any route that avoided taking left turns.

Ann was predeceased by her parents William and Anastacia (Richard) Mara and her brothers William and Robert, her Aunts Marg Shannon, Mae Schoefield and Uncle Ed Mara, her mother-in-law Helena Lyons and her beloved pets – Pepper, Gabby I, Gabby II, Casey, Punchie and Tiggy.

Donations in Ann’s memory may be made to Alzheimer’s Association, 309 Waverly Oaks Rd, Waltham, MA 02452 or www.alz.org/manh

A Celebration of Life of Ann’s life will be held at a later date.