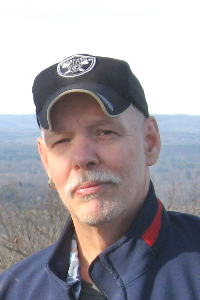 Michael B. McLain, age 71, passed away on Sept. 28, 2022 after a long battle with complex health issues. He was born on May 28, 1951 in Chicopee, at Westover Air Force Base, the son of the late Staff Sargent William E. McLain, and Marguerite (Berry) McLain. He spent his early years in Texas, Arizona, and Maine. The family moved to Springfield, MA in 1963. After graduating from Roger L. Putnam high school, Michael joined the US Navy. He was stationed in Puerto Rico during the Vietnam Conflict as an aircraft technician and traveled often when on leave.

Michael returned to the Springfield area and worked as an electrician’s apprentice. He was a talented artist and attended Springfield Technical Community College. In one of his art classes, he met Lucy Folta, and they began their life together.

Michael worked as a painter and painting Foreman most of his life, but also performed restoration work in a wide variety of capacities including; historic homes, buses and cars.

Michael, also known as “Spike”, was a talented musician. He played bass guitar in rock n roll bands for decades, often with Lucy on lead vocals and his younger brother, Scott, on the drums. He later enjoyed jamming with his sons. He was also a very knowledgeable lighting and sound technician. He was an avid Raiders, Patriots, Red Sox, and Celtics fan and enjoyed watching games with his sons and nephews. He was an excellent cook. His specialties included chili and Texas style barbecue. He always looked forward to hosting and cooking huge family dinners every holiday, and loved to throw backyard picnics full of delicious food, live music, family and friends.

Being around his family meant everything to him. He enjoyed his summers with them camping, going to the Cape, Gloucester and Maine.

In his later years, he often traveled to Houston, TX to visit his daughter and granddaughters . But his most memorable trip was the family Vacation to Grand Canyon, Bryce Canyon, Zion National Park, and Las Vegas.

He is survived by his three sons, Christopher McLain of FL, Raymond McLain and his fiancé Danielle Bordeau of Chicopee and Alexander McLain and his wife Alexandra of Chicopee; two daughters, Melissa McLain-Melloni of Springfield and Audrey Millican and her husband Eli of Houston, TX; his beloved wife of 41 years, Lucy Folta of Chicopee; one sister, Colleen Speare of Hampden; seven grandchildren, Alexandria, Chloe, Samantha, Ashlyn, Summer, Jael and Giana. He is predeceased by his siblings Charles McLain, Scott McLain and Dana Grizwoc.

Calling hours will be held on the morning of the funeral, Wednesday, Oct. 5, 2022 from 11:00 AM – 12:00 PM at the Grise Funeral Home, 280 Springfield St, Chicopee. An in house prayer service will take place at 12:00 PM followed by burial with military honors in Prospect Hill Cemetery in Hampden, MA. Memorial contributions may be made to K9s for warriors, https://k9sforwarriors.org. For online condolences, please visit www.GriseFH.com.