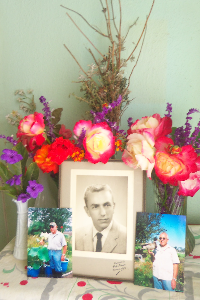 PERRY CANDIANIDES (KANDIANIDIS), 83 of Ventura CA, passed away on September 3, 2022, at his residence in the comfort of his own home.

Born in Ventura, he was a lifelong resident attending local schools, namely Greek School at the Washington School, and was a graduate of Ventura High School (’58) and was known for being a true renaissance man being gifted in many fields of study especially in his vast knowledge of ecology and aviary science. Perry was extremely knowledgeable and had a deep love for flora and fauna. As an avid bird collector and caretaker of all avian species he possessed an incredible hands-on self-taught knowledge of animal behaviors and husbandry. He was well known in his midtown Ventura neighborhood for his fruit bearing trees that produced Mediterranean delights of figs and quince along with fruiting trees from around the globe.
Perry hosted several long-standing relationships across the seaboard with interested peoples regarding avian species which afforded him the opportunity
to visit these friends throughout the years in Alabama, Florida, Georgia, and Texas. He was a member of the Ventura Audubon Society and the American Dove Association, which he was featured in the DoveLine (September 2014 Issue #3) an Interview Carl Naether, Professor at University of Southern California, who authored many books. He was Known for caretaking for injured waterfowl hosting their rehabilitation before their transfer to Santa Barbara or the Ventura settling ponds for release. He also had the opportunity to build his own wetland pond here in the community of Ventura where the release of western pond turtles and various aquatic flora and fauna flourished to safety. Perry spent a lot of time releasing rehabilitated birds and mammals back into the environment of the settling ponds along the shores and greenspaces of Ventura.
Ultimately, Perry lived a very simple life, one of happiness and that celebrated Greek and Turkish Culture. Known for educating people on the details of Greek and Turkish foods, he made it clear to family and friends that they were descendants of the Byzantine empire which was consumed by the Ottoman empire. He taught us so much about Greek geography and the details of Greek and Turkish food culture in each region.
Being a world traveler and loving the old country, Perry had the pleasure of visiting Greece and Turkey in 1965, 1971 when he visited northern Greece and experienced snow, and, again in 1978 when he witnessed the great earthquake Thessaloniki (Salonica). His last visit to Greece and European Turkey was in 2016 with nephew and friends to cherish the great memories of their ancestors.
He leaves a host of friends, fellow conservationists and family behind to mourn his loss. His good deeds live on in the animal life along the shores here in Ventura to the Montana Rockies.

One genuine kind friend wrote on September 4, 2022:
“Kindness and caring has always—as long as I’ve known you, emanated from your soul and beamed through your big eyes. Gentle friend, on this next leg of your journey, the light you have shaped with this world will most definitely light your path into the next dimension.
You are loved and will be loved, I will miss seeing your sweet face as we would visit on the times I visited my boys across the street (Michael & Kyle).
A beautiful blue Mediterranean cove on one of your Greek islands awaits you, peaceful traveler, always your friend.”
**written from a love of roses**