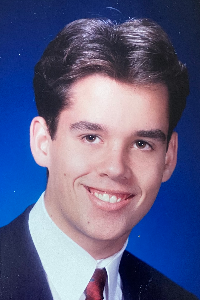 James was a lifelong resident of Canton. He was a Double Eagle, graduated from BC High class of 1995 and Boston College Class of 1999. He was a teacher in the Canton Public Schools for several years and had found a passion for graphic arts.

Beloved son of Kathleen A. (O’Toole) and James E. Gibson. Loyal Brother of Marybeth Santos and her husband Justin of Canton and Kevin P. Gibson and his wife Audrey (Wiederhold) of Canton. Devoted Uncle of Sophia and Will Santos and Kevin and Emily Gibson.

James will be dearly missed by his large extended family and long time friends.

James will be welcomed into heaven by God and several family members especially his Aunt Mary and each of his Grandparents.