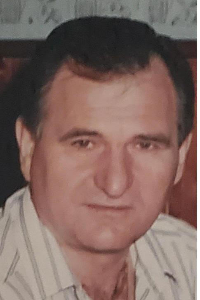 John Yantsides, 77, of Auburn died Tuesday, September 27th at home surrounded by his loving family. He leaves his wife of 55 years, Menexia (Kapoukranidis) Yantsides; his two children, Helen Hatzopoulos and her husband, John of Auburn, and George Yantsides and his fiancé, My Lam of Auburn; three grandchildren, Vasiliki and Menexia Hatzopoulos, and Maria Yantsides; his siblings, Paschalia and her husband, Dimitrios Gilantzis of Holden, Soultana and Dimitrios Skritakis of Worcester, Chris and Daphne Yantsides of Rutland, and a sister-in-law, Paschalia Yantsides of Worcester; and many nieces, nephews, and extended family. He was predeceased by his parents, two siblings; James G. Yantsides and Dimitroula Pirpiris; and brother-in-law, John Pirpiris.
He was born in Greece, the son of George and Eleni (Shopi) Yantsides, and immigrated to the United States in 1970. He was educated in Greece and served in the Greek military. John owned and operated several pizza shops, including the Aegean in Chepachet, RI, and Leicester House of Pizza. Following retirement, John also worked at Rutland House of Pizza.

John was a member of St. Spyridon Greek Orthodox Cathedral and Cultural Center Hrisohorafiton Alexander the Great. He also attended services at Sts. Constantine and Helen Church in Webster. He was a generous and social man who was always on the go visiting friends and family. John enjoyed going back to his homeland, Greece, where he visited and hosted extended family and friends in the home that he built 20 years ago.