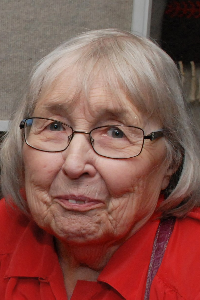 Grace Griffith Hoag, 96, died peacefully at home on September 26, 2022, attended by her caregiver, companion and son, Nicholas Hoag and her daughter, Rebecca Atwood. Many of her large family had been with her in recent days.

Grace was known for her cheerful temperament and spark of mischief. She was an enthusiastic volunteer, appreciator of people (especially children), and lover of both adventure and tradition. Her family and friends regularly visited on Sunday mornings for brunch.

Grace was born at her parents’ home in Manchester, Vermont. She lived with her father Edward Griffith who was a probate judge, her mother Emma Griffith and older brother Charles Gould Griffith. Grace graduated from Smith College, majoring in physics, and worked as a physicist in Cambridge after college. She met her future husband David, an MIT graduate student at a Cambridge square dance. David and Grace lived in Medway, Massachusetts and had five children within seven years. They continued to live in their 1800 house for the rest of their lives. They also had the opportunity to travel to five continents.

Grace stayed very busy as a school librarian, cub scout leader, and held many Town of Medway volunteer positions in the Historical Commission, Historical Society, Library Board of Trustees, Friends of the Medway Library and Medway Cultural Council. She and Priscilla Howker wrote an Images of America book on the town of Medway. Grace was very interested in genealogy, and wrote a book with her niece, Hope Luedeke, called Kate Hill Kelley, Letters from Vermont Families.

Due to Dave’s busy travel schedule for his career, Grace had most of the responsibility for their large family and home which included sheep, ducks, geese, chickens and honeybees. They also had a pet raccoon. There were always neighborhood children to watch and also her elderly mother. Grace handled all of this with good humor, even the times when the sheep escaped their pen or the bees swarmed.

In the 1960’s Grace became very interested in the range of political thought in the United States and after hearing a lecture by an expert in that field, Gordon Hall, she worked for many years with him as a research assistant, collecting publications and correspondence from members of hundreds of political groups. The collection is now in the hands of Brown University as a special collection in the Hay Library. There are also Hall-Hoag collections at Brandeis University, University of Akron and Yad Vashem.

Internment at Evergreen Cemetery will be family-only. A celebration of Grace’s life will be held in the spring for friends and colleagues.

Donations in Grace’s memory may be given to Partners in Health, Southern Poverty Law Center, Medway Historical Society or a charity of one’s choice.

Arrangements are under the care of the Ginley Crowley Funeral Home, Medway (www.ginleyfuneralhomes.com).