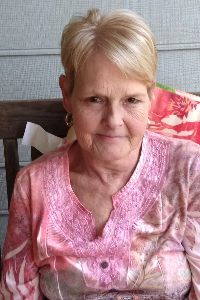 Joy Irene Pridgen, 68, of Fitzgerald, Georgia, peacefully passed away on Wednesday, September 28, 2022, at her residence surrounded by family.

A private memorial service will be held at a later date to honor Ms. Pridgen’s life.

Ms. Pridgen was born August 31, 1954, in Ben Hill County to the late Walter Jackson Steverson, Jr. and Millie Kinnett Steverson Burke. She was a former employee of Custom Sports Wear, Tice Yarn, Modern Fibers, and Shaw. She worked until she was forced to retire due to health reasons.

Ms. Pridgen was an avid animal lover. She would take in any stray if she could get by with it. She has been known to rescue squirrels, cats, dogs, chickens, donkeys, horses, and any animal that needed love. She also enjoyed growing and tending to her flowers and plants. Fishing was one of her favorite past times also. She loved anything outdoors.

In addition to her parents, she was preceded in death by a sister; Patsy D. Milligan and her step-mother; Grace Steverson of Columbus.