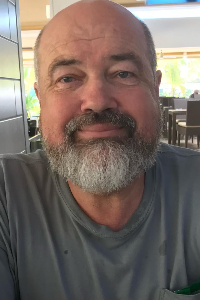 He was born in Washington, DC, on Oct. 6, 1957. He attended South Portland Schools and graduated from Southern Maine Christian School. Later, he attended SMVTI.

Doug was a devoted husband, father, grandfather, son, brother and friend. He spent his life giving to others and living in God’s image whether it be with his Bead Box Ministry or helping those in need. He also enjoyed hiking, woodworking, and gardening. Those who knew him knew of his love for poetry. He was a talented poet and wrote something for almost every event and family member.
He was also an adventurer. He enjoyed exploring and camping with his wife Tammy and they made countless memories with their camper they named “FLORA”. (Fun Loving Old Retired Adventurers).
Doug always made time for those he cared for. His love for Tammy was immeasurable. His children and grandchildren were his pride and joy. They called him “The Grandfather”, and that he was.

Throughout his working years, Doug was employed on the railroad. He worked for the former Maine Central and Guilford Railroads and retired from Pan Am Railroad. He worked as a trackman, brakeman, conductor, and eventually engineer. In his later years, he even was the engineer for the Thomas the Tank Engine ride at Conway Scenic Railroad.

He was a member of the Cornish Volunteer Fire Department and was an elder at the Grace Bible Church in Gorham where he also taught Sunday School. He also held a ministry for the homeless.

He will always be remembered for his sense of humor and being a loving family man with a true love for God.

He is predeceased by his father- Charles Niles Jr.; and his stepfather- Pastor Guy Duff
Doug is survived by his beloved wife- Tammy (Brown) Niles; his mother- Sandra Duff of Hollis; his children- Doug Niles Jr. of Biddeford, David Niles and his wife Jennifer of Windham, Dana Niles of Bangor, Kayla Fournier and her husband Danny of Standish, and Dan Niles and his partner Megan of Gray; siblings- Carolyn Gendron and her husband Timothy of Hollis, David Niles and his wife Kathleen of Waterboro, Cynthia Libby and her husband Harvey of Waterboro, and Darren Niles of Lyman, Stephen Duff of NH, Brenon Duff of FL and David Duff of MA; grandchildren- Shane, Madison, Kyle, Alex, Talia, and Casper; and a great grandson- Nolan. And many nieces and nephews.

Burial will be private amongst his immediate family at Pine Hill Cemetery in Dover, NH.

A memorial service to celebrate Doug’s life will be held on Saturday October 8 at 1 PM at the Grace Bible Church, Deering Road in Gorham.

Online condolence messages can be submitted at the Poitras, Neal & York Funeral Home website, www.mainefuneral.com
In lieu of flowers donations can made to your local homeless shelter.