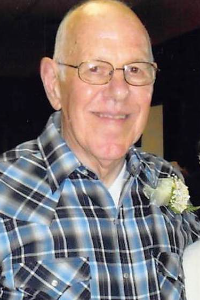 
Charlton – Roger E. Desautels, 92, of Charlton, passed away peacefully on Monday, September 26 in his home with family by his side after an illness.

Roger was married for 64 years to the late Doris M. (Comeau) Desautels, who died June 21, 2014. He is survived by two sons, Richard P. Desautels & his wife Sandy of Charlton and
Gary R. Desautels & Wife Dede of Leicester: a brother Paul Desautels of Northborough; one sister, Jeanne Burlingame of Virginia; five grandchildren, six great grandchildren, and several nephews and nieces. He was predeceased by his daughter, Donna Marie Desautels who died in 2008, and his sister Ruth Petniunis of Pompano Beach, FL

Mr. Desautels was born in Worcester, son of the late Ernest and Yvonne (Goulet) Desautels. He worked for over 30 years with the Wright Line Company in Worcester as a machinist, retiring in 1986. Roger then continued working as a fabricator for Lehigh Sheet Metal for another 7 years.

Roger was a member of North American Martyrs Church in Auburn. He was an avid camper, enjoyed traveling with his wife and family in their travel trailer as well as playing cards with family & friends. Roger loved to attend family functions and share his stories and memories of his amazing life journey of 92 years with all. We are so grateful and blessed that he touched our hearts for so long.

A funeral will be held on Friday, September 30 from the Alfred Roy and Sons Funeral Home, 12 Hammond St., Worcester, with a Mass at 11 AM at North American Martyrs Church, 8 Wyoma Drive, Auburn. Burial will be private at a later date at St. Joseph’s Cemetery in Leicester. Calling hours are Thursday, September 29 from 5-7 p.m. at the funeral home. In lieu of flowers, memorial contributions may be made to the Dana-Farber Cancer Institute/The Jimmy Fund, 10 Brookline Place West, Brookline, MA 02445.