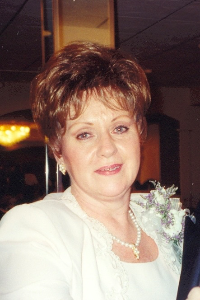 Paulina F. (McNamara) Curran, a longtime resident of Melrose, passed away peacefully surrounded by her loving family on September 25th after a long battle with heart disease. She was 79 years old.
Paulina was the beloved wife of John J Curran Sr. She was the daughter of the late Ernest D. and Elizabeth F. (McNeil) McNamara. She was the loving mother of Kimberly A. Curran and her late husband Amar Khelifi, Tracy E. Smith and her husband Robert A. “Bob” Smith, Michelle F. Curran, John J. Curran II and his wife Karen M., and Irene R. Curran. She was the loving sister of the late Ernest D. McNamara Jr. She was the cherished grandmother of Briana, Shauna and Marissa Curran. Paulina was the caring “mother” to her two favorite cats Bella and SuzieQ. She also leaves behind extended family in the Canadian Providences.
Paulina met her adored husband at the wedding of a mutual friend. She caught the bouquet, he caught the garter and the rest is history. After she had her first child, she dedicated her time to be a loving and wonderful mother. Paulina was the director of the First Communion Program at the Incarnation Catholic Church in Melrose. She and her husband were very involved with the church as lectors, organized church dances and other church functions.
When her children were older, Paulina decided to take a temporary job as a secretary/stenographer at Hanscom Air Force Base and made it permanent. This led to 30 years of dedicated service in which she received numerous commendations. She began her career working in the Business Management Office for the Deputy of Surveillance and Control Systems. She was selected and completed the Financial Management Training Program. Her next career move was to work on the Space Defense Program while coordinating with members of the Navy, Air Force and Department of Energy. Next, she was promoted to working on the Joint Imagery Processing System Program. Her expertise was used to launch the Eagle Vision Program which she oversaw until it received its own budget program. Her last position was as a Lead Analyst supporting the Chief Program Director and members of higher headquarters. Her background and expertise facilitated the daily Financial Management requirements in support of an $883M Program Budget. She was the first civilian to retire with Military Honors in 2007.
The funeral will be held from the A. J. Spadafora Funeral Home, 865 Main Street, Malden on Monday, October 3rd at 9:00am followed by a Mass of Christian Burial in the Incarnation Church, 429 Upham Street, Melrose at 10:00am. Relatives and friends are respectfully invited to attend. Visiting hours will be held at the funeral home on Sunday, October 2nd from 2:00pm-6:00pm. Interment will be in Puritan Lawn Cemetery, Peabody.
In lieu of flowers, contributions in Paulina’s name may be made to the American Heart Association https://www.heart.org.