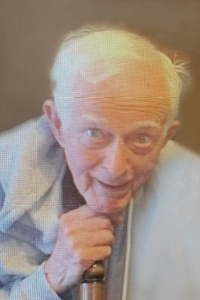 A 1948 graduate of Msgr. Coyle High School, Dan earned his undergraduate degree at Stonehill College and his Master’s degree from Bridgewater State. During the Korean War, Dan served in the US Navy. Prior to his retirement in 1975 from the Department of Transportation in Florida, Dan had been a Teacher at Whitman-Hanson High School and also worked at Brockton Ice and Coal and Gilmores Market in Brockton.

Devoted to church and education, Dan enjoyed helping the poor and spent years going on missions to Honduras to teach and build.

Dan was a member of the American Legion, Elks and St. Patrick’s Church in Wareham. He was an avid golfer and former Board of Director at the Brockton Country Club where he was Chairman of the Greens Committee.

He was the brother of the late Anne C. Barnes, Capt. Janet M. Redgate and Catherine F. Dwyer.

Visitation will be held in the Conley Funeral Home, 138 Belmont Street (Rte 123) Brockton, Thursday September 29, from 9-10am, with a Funeral Service at 10am. Burial with military honors will follow in Calvary Cemetery.