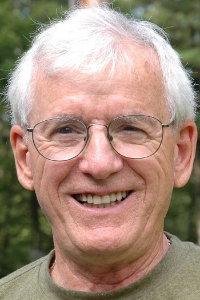 Norman René Trudeau was a beloved son, brother, husband, father, friend, neighbor, colleague, and companion during his 89 years of life. A resident of Bedford, NH, he passed away peacefully with his oldest daughter by his side on September 14, 2022 from injuries sustained in a recent fall. Norman was born on January 22, 1933. He was the 5th child born to the close-knit French-Canadian family of Louis and Hélène Trudeau and their 11 children in Barre, Vermont. We will remember him for his brilliant mind, boundless energy, strong work ethic, and his loving commitment to his children and grandchildren.

Norman attended the Notre Dame Institute in Alfred, ME and graduated from Spaulding High School in 1950. His first job was working alongside his father at the Rock of Ages granite quarry in Barre. After high school he was a toolmaker’s apprentice for the May Engineering Co., then served 2 years in the U.S. Army. In 1957 he married Claire (Moulton) Trudeau, and they raised their 7 children in Tewksbury, MA. During this time, Norm attended Northeastern University, graduating with honors and a B.A. in physics in 1962. He continued at N.U. and supported his family by working at M.I.T.’s Lincoln Laboratory while earning his M.S. in electro-optics in 1968. Later, he was a developer and manager for the design, fabrication, and testing of sensor optics for the LES Satellites TITAN III-C program at MIT. From 1979 until his retirement in 1998, Norm was a manager in research and development of optics and electro-optics at Kollsman in Merrimack, NH.

Norm was a Boy Scout as a child in Vermont, and his love of scouting brought him into service with Tewksbury Troop 49 as Scout Master and later as a Merit Badge Counsellor for many years. He was an active communicant and volunteer at St. William’s Church in Tewksbury and later at Our Lady of Mercy in Merrimack, NH. After retiring, Norm devoted many years and hours to counseling NH small business owners for SCORE. He also devoted his time helping the elderly with the IRS Volunteer Income Tax Assistance program.

Norm loved capturing and cataloging his life through photos of loved ones, scenic locations, projects he worked on, and wildlife. He was an avid fly fisherman and enjoyed clamming at York Beach. Nothing made Norm happier than to be surrounded by his children and grandchildren. To this end, he organized a revolving schedule of birthday celebrations where the whole family gathered at a restaurant or home around a wonderful meal. Whether it was a musical recital, sports event, birth of a child, graduation, wedding, or any other gathering, Norm was always there to enthusiastically support his children, grandchildren, and large extended family. He was active, industrious, and resourceful to the end, forever building things in his basement workshop, working in the yard, and figuring out how to foil the bears and squirrels with a new bird feeder contraption. He was always ready to apply his time, resources, and abilities to helping his children however he could.

Norm is survived by his daughters Susanne, Juliette, and Jennifer, his son William Trudeau & wife JoLynn,13 grandchildren, one great-grandson, and his devoted companion Anita Turner. He will also be missed by 5 beloved siblings and many dear nieces and nephews. He is predeceased by 3 sons, Steven, Douglas, and Thomas, as well as his parents and 5 siblings.

Norman’s legendary organization made him the family archivist, helping us all to remember the events of our lives and the history of our family. This man had a great career and reached many lives with his volunteerism and outgoing personality. But we will fondly remember Norm, Dad, Pépère most of all for the great love and interest he showed to his children and grandchildren and the fun and energy he always brought with him.