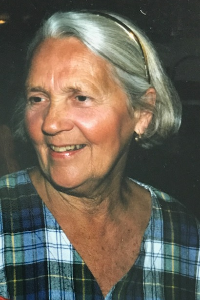 Born in Cambridge on August 14, 1935, she was the daughter of the late James J. and Molly (Scanlon) Regan.

She was a member of the Martha’s Vineyard Women’s Club and the Friends of the Edgartown Library.
Mary loved the beaches and tranquility of Martha’s Vineyard, the companionship of her family and friends and occasional trips to Bermuda.

Mary was the sister of the late Francis X. Regan and his surviving wife, Nortrud, of Tewksbury, and the late Roberta Randlett, of Woburn.

In addition to her sister-in-law, she is survived by her nieces and nephews, James G. Regan, of New Ipswich, NH, John F. Regan, of Billerica, Carolyn M. Regan, of Dracut, Michael F. Regan, of Tewksbury, Kathy Lally, of Bradford, Christine Pottle, of Chelmsford, Jeanne Rainone, of Tewksbury. She also leaves many grandnieces and grandnephews.