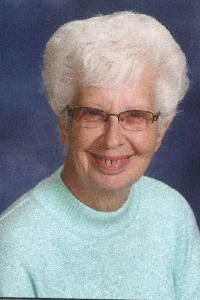 Sherry’s prayer was answered the evening of September 14th at Prosser Memorial Hospital when our Lord took her home.
Sherry was born in Walla Walla, Washington to Charles and Ida (Kelly) Fouts. The Fouts family resided in Milton-Freewater, Oregon before moving to Prosser in 1954.
Sherry graduated from Prosser High School with the Class of 1961, after which she received her “Certificate in Cosmetology” from Beauty College in Spokane in 1963. That same year she began her career at “Bobby’s” as a beautician. She worked many years at “Bobby’s” making life-long friends before working at “Demma’s” where she retired.
Sherry enjoyed sewing, gardening and working with the youth in the church. Many youngsters affectionately called her “Grandma Sherry” as she took an active interest in their lives. She especially enjoyed her grandchildren and their antics. They called her “Gee-Gee.”
Sherry is survived by her son, Jeriel (Julie) Ferguson of Prosser; her step-children, Mike and Renee Ferguson; her grandchildren, Chad Merrill of Orient, WA, Jackie Burns of Spokane and Chandler (Randi Fisher) Ferguson of Prosser; her great-grandchildren, Makayla, Austin (Noni) Karle, Dana Karle and Edgar and Anthony Ferguson; her brother, Roy (Ramona) Fouts, Connie (Ken) Lanning, Patricia Fouts and Peggy Valnes. She is also survived by numerous nieces and nephews and adopted families. Sherry was preceded in death by her husband, Jerry Ferguson; her infant daughter, Sherra Lyn Ferguson; her parents, Charles and Ida Fouts; and her brother-in-law, Terry Valnes.
In lieu of flowers please donate to St. Jude’s Children’s Hospital (Stjude.org). A celebration of life will be announced later. You may sign the guestbook at www.Prosserfuneralhome.com