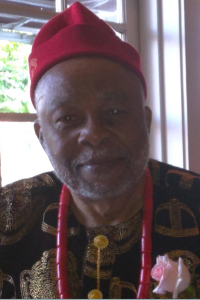 Dominic was the son of the late Frederick and Teresa (Ezewudo) Agbasi of Umudara, Ukpor, Anambra State, Nigeria. He was educated through the Nigerian school system. He embraced the religious practices of his mother, which was Catholicism. He often spoke about his experiences serving as an altar boy, playing semi-pro soccer, and having private and enduring conversations with his dad. As a young man, he worked for the Mission of California Soda Company, until he made a pivotal life changing decision to move to the United States to further his education.

In the early 60’s, Dominic gained admission to Bryant & Stratton Business College of Buffalo, NY, where he obtained a General Business Degree. He continued to further his education at State University of New York in Buffalo to obtain a Bachelor Degree in Philosophy. He met and married his wife of 52 years, Joeadlene (Doyle) Agbasi of Monroe, LA and became the father of eight children.

Dominic held different occupations during his life, but the memorable and rewarding ones were, when he worked as a medical orderly at Sister’s Hospital, a counselor with Upward Bound (a federal program that offered support to low-income high school students in their preparation for college entrance), and a counselor for recovering alcoholics.

Another pivotal moment in Dominic’s life is when he decided to move his family to Nigeria in 1979. While in Nigeria, Dominic became a manager of a poultry farm, and eventually owned his own businesses in food production. The food production areas were in poultry, eggs, and a garri processing plant. In early 2000, Dominic transitioned to semi-retirement and moved back to the United States, where he bought motor vehicles from the U. S. for resell in Nigeria.

Always a man seeking to guide himself and his family in the religious realm of life, he moved from Catholicism to various denominations of Holiness. He ultimately converted to the Judaism faith. He became an active member of Temple B’Nai Israel Congregation in Monroe, LA. In failing health, Dominic made his final pivotal life change and moved to Burlington, MA to be near his family.

Besides being with family, Dominic loved cooking, fishing, playing soccer, listening to political news and classical music, reading his prayer book and researching the history of the bible. Dominic was a man who grew and aged into gratefulness, thoughtfulness, and insightfulness. He was a man of peace, a man of God, who died peacefully in the Lord.

He leaves to cherish his memories: his wife Joeadlene, 8 children, 11 grandchildren, 6 brothers, 6 sisters, and a host of nephews, nieces, cousins and friends.

Funeral services will be held at Casper Funeral and Cremation Services at 187 Dorchester St., Boston, MA on Wednesday, October 5, 2022 at 11:00 am.

Internment will be held privately.

Services will also be streamed using Zoom. Please use the following ZoomLink.