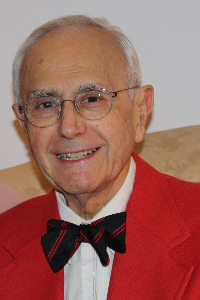 Attorney Salvatore F. Stramondo “Sam”, a resident of Andover, formerly of Lexington and beloved husband of the late Nazarene “Nan” (Mondello) Stramondo, passed away at the High Pointe Hospice House in Haverhill on Friday evening, September 23, 2022. He was 93 years old.

Born in Lawrence, Massachusetts, on March 1, 1929, he was the beloved son of the late Antonio and Gaetana “Mara Rosa” (Contarino) Stramondo. Sam was a graduate of Lawrence High School. Following graduation, he served in the United States Naval Reserve. Sam was the first in his family to attend college and graduated from Boston University and Boston University Law School, cum laude, where he was senior editor of the Boston University Law Review. He received his L.L.M. from Harvard University Law School and went on to practice civil litigation at the firm of Badger, Sullivan, Pratt & Doyle, one of the largest law firms in Boston at the time. He went on to found the firm Goodspeed & Stramondo in Boston, and later continued his career as a solo practitioner.

In his spare time, he enjoyed playing golf, reading and studying history. He and his wife travelled to many areas throughout the world including a trip to China with a Massachusetts contingent of Judges and lawyers. He volunteered teaching English as a second language at Lawrence Evening High School for over a decade. In his later years, he taught computer through the elder services in Lawrence. Sam cared deeply about education and helping others learn to be the best that they could be. Above all, he was a very devoted husband, father and grandfather. He will be dearly missed.

His funeral mass will be celebrated in the St. Augustine Church, 43 Essex Street, Andover on Saturday, October 1, 2022, at 12:30 PM. Calling hours will be held in the Burke-Magliozzi Funeral Home, 390 North Main Street, Andover on Friday, September 30, 2022, from 4 to 8 PM. Interment will be privately held. Donations in Salvatore’s memory may be made to the Lazarus House Ministries For additional information, please visit, www.burkemagliozzi.com.