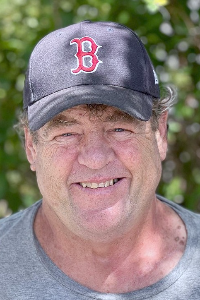 Jeffrey Joseph LaValley, 58, of Westport, passed away on Monday, September 19, 2022. He was the husband of Sarah (Caulfield) LaValley, they were married for 30 years.

Born in Springfield, MA, son of the late Joseph F. LaValley, Jr. and the late Caroline (Malinoski) LaValley, he had lived in Westport for the last 35 years. He attended high school in Haverhill, MA where he enjoyed playing baseball, basketball and football and spent every summer in South Dartmouth at the beach and fishing with his father. Following high school he entered the United States Air Force where he was stationed in Korea. He later received his degree in Culinary Arts from Johnson & Wales University and worked in many local restaurants. After his discharge from the Air Force he lived in California before returning home on a solo motorcycle trip from California to New Jersey to his parents home, camping all the way. Jeff then decided to move to the Westport / Dartmouth area where he was always happiest, working as a landscaper and carpenter initially.

He met Sarah at a clambake at Dartmouth Fire District 2 and were introduced to each other by a mutual friend Peter Gonet. They both volunteered at clambakes over the years at District 2, Allen's Neck Friends and the Westport Fisherman's Association which is now part of the Buzzards Bay Coalition. He also did many private clambakes for charitable causes.

Jeff became a cabinet and furniture maker first working at Adriance Furniture in S. Dartmouth then Southcoast Custom Woodworking before starting his own business as Westport Custom Woodworking, where he made many pieces of furniture and cabinetry for clients in the area.

He enjoyed going to the beach to watch the sunrise many mornings accompanied by one of his dogs. He loved his dogs dearly and spent much time with them. An avid fisherman and boater, he also loved to cook for his family and friends.

Memorial service to which relatives and friends are invited will be Saturday, November 5, 2022 at the Westport Point United Methodist Church, Westport Point at 11:00 A.M.