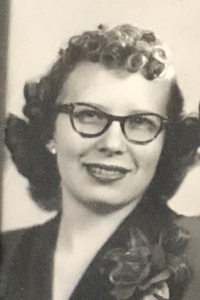 Phyllis Lee Freeman, age 90, entered into rest on September 16, 1922 at her home at Sun Terrace in Prosser. She was born to Ralph Fern and Lela Lee (Williams) Myers on December 15, 1931 in Montrose, Colorado. Her family lived in Colorado until she was 4 and then moved to Sunnyside where she graduated from Sunnyside High School with the Class of 49. She also spent some time in the Tri-Cities until they settled in Grandview.
On November 19, 1949 Phyllis and Donald Freeman were married and made their home in Sunnyside. They enjoyed 15 years of traveling and living in Arizona. Phyllis was a beauty school graduate and worked as licensed beautician as well as working as a sales clerk for J.C. Penney. She enjoyed antiquing and was a life member of the VFW.
Phyllis is survived by her son, Gary Freeman (Karla) of Grandview; granddaughters, Erin Henn (Josh), of Kennewick, Gina Bradley (Sean) of Prosser and Sheila Kassinger (Dan) of Grandview; 14 great-grandchildren; and numerous nieces and nephews. She is also survived by sister, Bonnie Allen of Prosser; brothers-in-law Bernard Freeman (Crystal) of Richland and Clyde Freeman of Walla Walla.
She was preceded in death by her parents; her husband, Donald Freeman; infant son, Dale Dean Freeman; sister, Harriet Sandjer; and brothers, Claude and Glenn Myers.
A private family gathering will take place on Monday, September 26 and a celebration of life will be held at a later date.