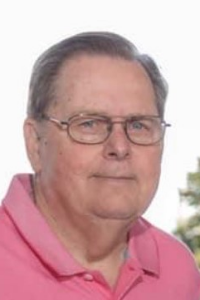 Rev. Ralph Stephen “Pete” Jones, 77, of Enigma passed away peacefully at home surrounded by his loving family on Thursday, September 22, 2022. His funeral service will be held at 11:00 a.m. Monday, September 26, 2022, at Enigma Baptist Church with the Rev. John Falotico, the Rev. Gary Cadwell and the Rev. Gerald Purvis officiating. Rev. Jones will be laid to rest at Enigma Cemetery. The family will receive friends on Sunday, September 25, 2022, from 6:00 to 8:00 p.m. in the Chapel of Bowen-Donaldson Home for Funerals.

He was born in Enterprise, Alabama on September 1, 1945, to the late Hubert and Effie Mae Anderson Jones. Pete served his country in the U.S. Army in Vietnam. He married the love of his life, Kathy, on October 3, 1969. Pete graduated from North Florida Theological College (formerly Baptist Bible Institute) with a Bachelor of Ministry in Biblical Studies in 1984. Shortly thereafter, he began his ministry at Enigma Baptist Church, where he faithfully served the Lord and his community for 35 years before his retirement in 2019. He was called “Preacher Pete” by those in his congregation and most people who knew him.

Pete is survived by his wife, Kathy Parrish Jones and his children, Nicole (Michael) Richbourg of Nashville, GA and Stephen (Kristy) Jones of Auburndale, FL. He was a loving granddaddy to Benjamin Cornelius, Emma Cornelius, Gracie Jones, Nellie Jones, and Mercy Jones. He was preceded in death by his two brothers, Lamar Jones, and Rex Jones of Columbus, GA. Pete is survived by three sisters, Hazel Livingston, Betty Middleton, and Evelyn Whitehead, all of Columbus, GA and numerous nieces and nephews.