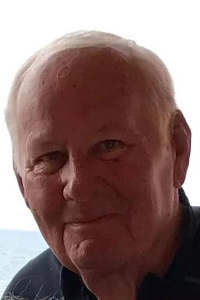 Stephen William Murphy, 79, of Anderson, passed away unexpectedly on September 15, 2022.

He was born on February 2, 1943 in Peoria, Illinois, to the late John and Dorothy (Sinclair) Murphy. He was a graduate of Spaulding Institute in Peoria. He received a scholarship to play football at Northwestern University where he also met his future wife Jan. He was a member of Sigma Chi Fraternity. Later, Steve served in the US Army during the Vietnam War where he was stationed in Thailand. He worked in retail management for over 40 years for Sears and Roebuck and Tractor Supply Company.

Steve enjoyed golfing with his friends, listening to classical music and spending time with his grandchildren.

He will be dearly missed by his family, friends and all who knew him. A Celebration of Life open house for Stephen Murphy will be held October 29th from 1-5 pm at the Murphy residence.

In lieu of flowers, donations can be given to the Animal Protection League or Madison County Humane Society.