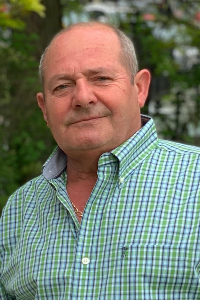 **MR. CAMACHO'S VISITATION IS BEING HELD AT MAHONEY FUNERAL HOME**

Jose M. Camacho, 70, of Lowell, passed away suddenly at his vacation home in Graciosa on September 10, 2022.   He was the husband of Gelcimina Camacho, with whom he celebrated their 47th wedding anniversary in February.

He was born on August 27, 1952, in Graciosa, Azores, Portugal, he was a son of the late Joao Camacho and Judite S. Mendonca.  He grew up and was educated in Graciosa.  He served in Angola for three years with the Portuguese armed forces.  After his service he returned to the Azores, married Gelcimina, and they relocated to the United States together, settling in Lowell.

He was a passionate fan of soccer, he would never miss a Sporting match, he would find it on TV, or be near a radio anytime they would play.  He loved spending time with his family, especially his grand daughters, he enjoyed bringing them places and picking them up from school.  For over 25 years he worked for Interstate container, and more recently worked for Advanced Polymers and Nordson Medical Components, he retired a few years ago, and leaves many friends there.

In addition to his wife Gelcimina C. Camacho of Lowell, he is survived by his son, Gary Camacho and his wife Jess Camacho of East Bridgewater, his two granddaughters Alyssa Camacho, Lyvia Camacho; his brothers and sisters in law, Noelia Siva and her husband John of Lowell, Leonia Mendonca and her husband Jose of Tewksbury, and Maria Sousa and her husband Helder of Tewksbury. He is also survived by his Godson Tim Silva and his wife Monique, his nephews and nieces  Joshua, and Jason Silva, Mitzy and husband Duarte Santos, Evan Mendonca, Andy Sousa; his great nephews, Gavin, Cole, Julian; his God Children living abroad, Sonia Espinola, Paulo Espinola both of Graciosa, Anabela Espinola of Terceira.  In addition he is survived by his aunts, uncles, cousins, and many close friends.

He was the brother of the late Helena Mendonca who passed away at a young age; his mother and father in law who were like parents to him, the late Aureolinda and Hermelindo Espinola.

On Friday, September 23, 2022 all are welcome to attend his calling hours from 9 a.m. until 12 noon at the Mahoney Funeral Home, 187 Nesmith Street, Lowell, MA 978-452-6361. His funeral mass will be offered at 1 p.m. at St. Anthony Church, 893 Central Street, Lowell, followed by burial at St. Mary Cemetery in Tewksbury. In lieu of flowers please make donations in his memory to Saint Anthony's Church, 893 Central Street, Lowell, MA 01852. To leave the family a message of condolence, please find us on facebook or use our website.