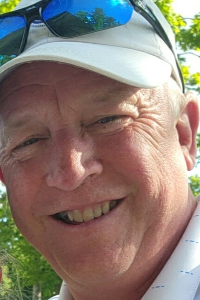 Kevin Keenan, age 62, most recently of Mansfield, formerly of Norwood, Canton and Hyde Park passed away on Tuesday September 20th, 2022, at Brigham and Women’s hospital after a courageous battle with cancer.

Kevin was born in Boston, MA on October 23rd, 1959. He spent over 35 years in a sales role in the consumer-packaged goods industry where he made many friends throughout his career. Kevin was an avid golfer and a member of Foxborough Country Club. Kevin loved sharing his passion for golf with his daughter, Jacquelyn, who fondly remembers quality time and conversations with her dad on the golf course. He also enjoyed vacationing at his home on the Cape and spending time with his family and friends.

Kevin was the son of the late Robert Keenan and Margaret (Holt) Keenan. He is survived by the mother of his children, Cheryl Keenan; daughters, Jacquelyn and Courtney Keenan; “grand-doghter” Kayah Coobear Keenan all of Norwood; siblings, Robert Keenan and his wife Kathy of Easton, June Taber and her husband Bob of Canton, Matthew Keenan and his wife Patricia of Easton; and girlfriend Jennifer Rendel of Foxborough. He was also survived by several nieces and nephews.

His visitation, to which relatives and friends are cordially invited to attend, will be held on Saturday, September 24th from 4:00-7:00 P.M. at the Sherman & Jackson Funeral Home, 55 North Main Street, Mansfield. There will not be a formal funeral service following the visitation.

In lieu of flowers, Kevin’s family has requested that donations in his memory be made to the Mansfield Animal Shelter P.O. Box 25 Mansfield, MA 02048.