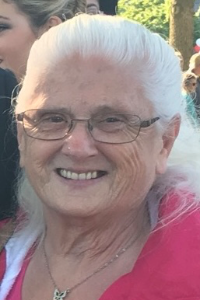 A longtime resident of Malden, Laraine was born and raised in Somerville. She worked for Catholic Charities for many years and was a Cub Scout leader. Laraine enjoyed being around her kids and attending the sporting events for her grandchildren.

Laraine was the wife of the late Roger W. Wixon and the daughter of the late George and Lillian Gray. She was the loving mother of Donna Ferraro and her husband Joseph of Florida, Roger W. Wixon Jr. of Quincy, Richard F. Wixon and his wife Margaret of Wakefield and Dianne Wixon and her husband Craig Griffin of Malden. She was the dear sister of Barbara Wilson and the late Fay Gray, June Gray and George Gray. Laraine was the grandmother of Michael Ferraro, Nicholas Ferraro, Marissa Ferraro, Bryan Ferraro, Crystal Zielinski, Matthew Wixon, Christopher Wixon, Amaya Griffin, and Achai Griffin and the great-grandmother of John Brennan, Ariel Zielinski and Nathan Gallo. She is also survived by many nieces, nephews and friends.

The funeral will be held from the A. J. Spadafora Funeral Home, 865 Main Street, Malden on Saturday, September 24th at 9am followed by a Mass of Christian Burial in St. Joseph’s Church, 770 Salem Street, Malden at 10am. Relatives and friends are respectfully invited to attend. Visiting hours will be held on Friday, September 23rd from 4-8pm at the funeral home. Interment will be in Holy Cross Cemetery, Malden.

In lieu of flowers, donations in Laraine’s memory may be made to St. Jude Children’s Research Hospital, 262 Danny Thomas Pl, Memphis, TN 38105 or at www.stjude.org.