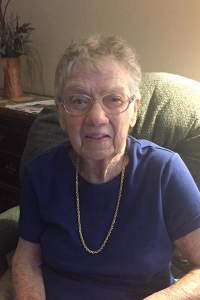 Mary E. (McGuire) Nolan, 97, of Cochituate, passed away peacefully on Saturday, September 17, 2022.
Mary was born in Boston on August 12, 1925, the daughter of the late John and Hilda (Hann) McGuire.
She spent her formative years in Watertown and graduated from Watertown High School with the class of 1943. One of Mary’s proudest accomplishments was earning her post secondary degrees while raising her children and working fulltime into her 50’s. She proudly earned an Associate of Science degree, with honors, from Mass Bay Community College and a Bachelor of Science degree, Magna Cum Laude, in 1982 from the former Boston State College (now UMass).
Mary was a fifty six year resident of Cochituate and was married fifty-three years to Ralph E. Nolan, PE, until his passing in April of 2001. Always a hard-working woman with a wide range of skills, she held various positions over the years, including school systems in Newton and Wayland, law offices, and the former Hardwood Baseball Factory in Natick. She also worked part-time and volunteered at the Wayland Public Library. Mary went on to become a valued Financial Analyst at Natick Labs for thirty years until her retirement in 1992.
She was a woman of strong faith and served as Eucharistic Minister, Pastoral visitor and a dedicated volunteer at St. Zepherin Church in Cochituate. Mary resided independently at Cochituate Housing until the age of 94 at which time she moved in with family. Mary was an avid golfer well into her 80’s.Her hobbies included reading, knitting, gardening, and walking. In recent years, she enjoyed puzzles, watching movies and listening to music. Mary always had a song in her heart and will be lovingly remembered for singing as she puttered around the kitchen. She always enjoyed good conversation about anything from family happenings to current events, and spending time with her family.
She leaves her children, George W. Nolan and his wife Susan of Orange, Daniel J. Nolan and his wife Frances of Naples, FL, M. Elizabeth “Beth” Gray and her husband Dr, David Gray of Henniker, NH, Michael J. Nolan and his wife Mary of Lunenburg, and Joseph F. Nolan of Wayland; eleven grandchildren, Sarah, Kate, Matthew, Andrew, Russell, Robert, Derek, Amanda, Declan, Ryan, and Jaymes; nine great grandchildren, Orianna Newton, Marcus, Jacob, and Zachary LeBlanc, Olive, Anderson, Chase and Avery Nolan and Martin Bourgeois. In addition to her parents and husband, Mary was also predeceased by her siblings, John P. Maguire, Patricia F. “Patsy” Callahan, Francis J. McGuire, and Margaret J. “Peggy” Patrick.
Visitations will be held on Thursday, September 22, 2022 from 9:30 to 10:30 am at the John C. Bryant Funeral Home, 56 Pemberton Road (off Rt 30), Cochituate Village, Wayland.
Mary’s Mass of Christian Burial will be celebrated at 11:00 am at Good Shepherd Parish at St. Zepherin Church, 99 Main St (Rt 27), Cochituate Village, Wayland.
Interment will follow in the Nolan family lot in Lakeview Cemetery.
For those who desire, gifts in Mary’s memory may be sent to St. Jude Children’s Research Hospital, 501 St. Jude Place, Memphis, TN, 38105 or St. Zepheirn Church, 99 Main Street, Wayland, MA 01778.