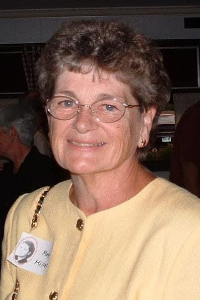 Margaret P. ‘Meg’ (Preiss) Miller, 86 of Tewksbury, passed away peacefully on Wednesday, September 7, 2022 at Blaire House of Tewksbury. She was the widow of the late Douglas L. Miller who passed away in 2007 after 47 years of marriage.

She was born in Waltham, MA on June 7, 1936 and was a daughter of the late Kurt G. and the late Lillian (Elder) Preiss. She was raised in Sheffield, MA, where she attended the area schools, graduating from Sheffield High School. She then earned a degree from Fisher Junior College in Boston and took her first job at the Christian Science Publishing Society. Once married, Meg continued using her secretarial skills at her church in Ipswich and later at local businesses in Newburyport and Amesbury.

Meg was a devoted mother and enjoyed creating memories with her children and grandchildren. She loved music and the cameraderie of being part of a musical group, whether playing the trumpet in high school, playing the piano for Sunday school, participating in a recorder group or making music with family. She also enjoyed tutoring English language learners at the Governor’s Academy and through the Newburyport Public Library. She loved learning about flowers and ferns and tended both flower and vegetable gardens at her home in Byfield. Friends and family remember her as a gentle, kind and strong lady.

She is also survived by her sister, Roberta Shepard and her husband, Gary of Alford, MA; her sister-in-law, Annette Preiss of Milton, VT; and numerous beloved cousins, nieces and nephews.

In addition to her husband and parents, Meg was predeceased by her son, the late SGT. Scott A. Miller, and her brother, the late Ernst Preiss.

At her request, services were held privately.