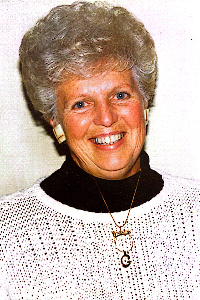 Gloria T. (Guyon) Berube, 93, of Plymouth died Monday, September 19, 2022 at Alden Court Nursing and Rehabilitation after a period of declining health. She was the wife of the late Ernest A. Berube.

Born in Highlands, New Jersey, daughter of the late William and Elizabeth (Pangborn) Guyon, she lived in New Bedford and Plymouth for most of her life.

She was a graduate of New Bedford Vocational High School.

Gloria was formerly employed as a caretaker at Savoy Convalescent Home for many years until her retirement.

She was a member of the Massachusetts Rhododendron Society.

Gloria enjoyed Christmas, knitting, playing BINGO and going to the beach. She was perpetually late and could always be heard saying "Give me 5 more minutes." She was happiest in her little cottage on the pond in Plymouth spending time with her family.

She is survived by her son, Richard R. Menard and his wife Janice of New Bedford; her daughter, Roberta G. Braga of Holden, MA; 4 grandchildren; 11 great-grandchildren; several nieces; and a nephew.

She was predeceased by her daughter, Lisa Ann Berube; and her siblings, Frederick Guyon, William Guyon, and Dolores Costa.

Her services will be held privately. For online guestbook, visit www.saundersdwyer.com.