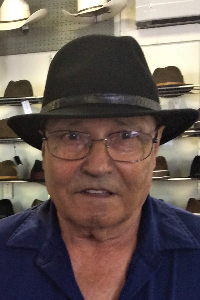 Arlindo Espinola Silva, 90 of Lowell, passed away after a long illness on Saturday, September 17, 2022 at his home with his family by his side. He was the widower of the late Leontina Lurdes (Ramos) Silva who passed away in 2015 after 60 years of marriage.

He was born in Graciosa, Azores, Portugal on December 2, 1931 and was a son of the late Manuel Mateus Silva and his stepmother, Ilda Gabriel Cunha. His mother, the late Henriqueta Espinola passed away when he was only 3.

Arlindo was raised in Graciosa, where he was educated, worked as a farmer, and served in the Portuguese military. He married Leontina and began their family in Graciosa before relocating to the United States in 1966.

Arlindo was a member of the Portuguese American Center ‘The Blue’s Club’, and was a faithful communicant of St. Anthony Church. He was employed as a laborer for many years at various places including the gas company, Belmont Country Club, Bradford Industries (formally Pandel). He enjoyed fishing, gardening, going to the beach, and was a skilled cards player. He loved soccer, especially supporting the Benfica team and the Blue’s Club Soccer team. Although he had many passions throughout his life, spending time with his family brought him the most happiness.

He is survived by his four children, Luciano Silva and his wife, Fatima of Vero Beach, FL, Joe Silva of Lowell, Manuel Silva and his partner, Diana Aucoin of Townsend, and Anna Marie and her partner, Wayne Comeau of Lowell; his grandchildren, Belinda, Brandon, and Brianna Silva, Ariel and husband Tom Lesniak and Ryan Gauthier; his great grandson, Benjamin Silva.

He is also survived by two step sisters Maria and Rosa of Graciosa; and many nieces, nephews, and cousins in the United States and Graciosa. And a special thanks to Merrimack Valley Hospice Care.

His funeral mass will be held at 11 a.m. at St. Anthony Church, 893 Central Street, Lowell, followed by burial at St. Patrick Cemetery.