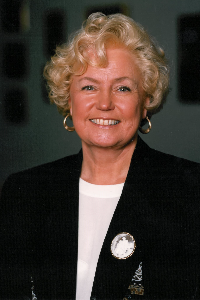 She spent her life as a devoted wife and mother, always finding a way to balance family life, all the while dedicating herself to endless organizations as a leader and volunteer.

She always had a love of travel, whether it be family vacations when her children were young, or where her speaking engagements took her. Later in her life she would take her grandchildren on epic tours across the globe.
It was while she was a student at Laconia High School that she realized her leadership abilities. In her junior year, she was a delegate to NH Girls State, where she was elected Governor, and a delegate to Girls Nation in Washington, D.C. She was vice-president of the Class of 1955 organizing several reunions. She was editor of the school newspaper the Laconian and President of the NH chapter of Future Homemakers of America.

Following graduation, she married Robert (Bob) Weeks, of the LHS Class of 1952. They built a family home on Sleeper Hill Road in Gilford, where they raised their 5 children. She and her husband were active members of the Gilford Community.

She began her long affiliation with the Lakes Region Hospital, as President of the Auxiliary. She became a member of the hospital’s Board of Trustees in 1978 and was elected Chairman of the Board, the first woman to hold that position in the history of the hospital. She was also a Trustee of the NH Hospital Association and became a member of the American Hospital Association’s General Council, and chaired the AHA Committee on Volunteers. In that capacity, she traveled to 33 of the 50 states, conducting workshops and speaking on volunteerism and trusteeship. She would later be invited and spoke at both Yale and Harvard. Following her husband’s death in 1988, she accepted the position of Director of Community Affairs and Development at the hospital.

Among her many honors was the Laconia Business and Professional Women’s Clubs selection as Woman of the Year in 1977, and the Lakes Region Chamber of Commerce Irwin Award for community service.

After her husband Bob passed away in 1988, she found solace at her seaside homes. She spent many winters at her home on Sanibel Island building lifelong memories with her grandchildren. After retiring in 2000, she moved to her home in Harpswell, Maine for 20 years before returning to New Hampshire to be near her daughters. Her most peaceful days were spent watching the activity on the water and beaches.

In lieu of flowers, the family asks that memorial donations be made to Society for the Protection of New Hampshire Forests -Weeks Woods, 54 Portsmouth St, Concord, NH, 03301, or Lakes Region VNA Hospice, 186 Waukewan St #6023, Meredith, NH, 03253.