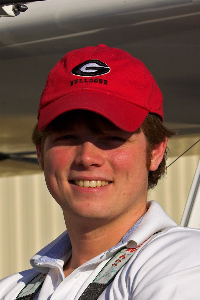 Bradford “Brad” Damon Jones, 37, of Ty Ty passed away peacefully at home on the beautiful, crisp Saturday morning of September 17, 2022. A graveside funeral service will be held for Brad at 11:00 a.m. Tuesday, September 20, 2022, at First Baptist Church of Ty Ty Cemetery, where he will be laid to rest. The Rev. Steve Luke will officiate. The family will receive friends on Monday, September 19, 2022, from 6:00 to 8:00 p.m. in the Chapel of Bowen-Donaldson Home for Funerals.

Born December 11, 1984, Brad was the son of Debra Chambless Jones of Ty Ty and the late George William Jones. In addition to his father, he was also preceded in death by his paternal grandparents, Herschel and Katherine Rogers Jones and his Uncle Dale Chambless.

He graduated with honors in 2003 from Tift County High School. During high school, he loved metal working under John Tucker and the Ag Academy under Lynne Cook. He went on to further his education at Georgia Southern University and received his Bachelors’ of Science in Civil Engineering in December 2008. During Brad’s second year of college, June 2006, he rolled his truck enroute to work at Tractor Supply of Statesboro, Georgia. This accident left Brad paralyzed chest level down. He spent the next five months at Shepherd Spinal Center of Atlanta, Georgia. During his stay there, he won the first scholarship from Able Flight, Inc. to learn to be a sport pilot. After returning home from Shepherd Spinal Center, he went the next two months, seven days a week to Phoebe Northwest in Albany to continue his therapy to get strong enough to return to Georgia Southern University in January 2007. He fought daily with 30% of his body doing 100% of the job to survive. Brad loved anything to do with space and space travel. He built NASA Apollo Saturn V out of Legos. Brad was always up for a challenge. He loved all animals, especially his cat, Murphy. Anytime he got around animals, they all came to him for love and affection.

In addition to his mother, Brad is survived by one brother and sister-in-law, Chris and Laura Jones of DeKalb and their children, Tucker, Everett and Marianna; his maternal grandparents, Laferrell and Mary Alice Salter of Tifton; his uncles and aunts, Randy and Cheryl Chambless of Ty Ty, Jeffrey and Lorie Salter of Dallas, Monty and Sharon Salter of Carrollton, Buddy and Debbie Salter of Clover, South Carolina, Michael and Charlene Salter of Sylvester and Ray and Kim Salter of Carrollton; his aunt and uncle, Shara and Dennis Dunn of Six Mile, South Carolina; his special cousins that kept him going were Brent Chambless of Hahira, Wesley Chambless of Sylvester, Dorada Chambless of Ty Ty, Kannetha and Robert Clem of Doerun, Jaden and Kaden Griffin of Doerun and Skylar and Aaron Wildes of Ty Ty; his special go to people if he wanted or needed something while Mom was at work were Scott Goodman, Gabe Goodman and Loretta and Danny Conway; his great Aunt Shirley and Hugh McCord liked to spoil him with computers, which he thoroughly enjoyed; and numerous other cousins that he might only see a couple times a year but that didn’t mean he didn’t love them all just as much.

Flowers will be accepted or memorial gifts may be made to Tift County Humane Society, 278 Georgia Highway 125 South, Tifton, GA 31794; or Worth County Human Society, 787 Ephesus Church Road, Poulan, GA 31781.