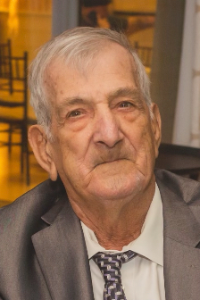 He was the son of the late George and Rose (Medico). He was married for 54 years to his wife Gisela prior to her passing in 2018. He said he was without her long enough and wanted to be “together again”. Devoted father to their three children, Charles, Michael, Theresa and her husband John Linehan all of Weymouth. He was most proud of his 10 grandchildren, Lisa, Dennis, Sarah, John and his wife Tammy, Brendan and his wife Stephanie, Emily, Kaitlin, Kacey, Melanie and Nathaniel along with 11 great grandchildren Haylee, Lilliana, Jack, Lorenzo, Noah, Alicia, Alissa, Luciano, Logan, Hannah and Layla. He also leaves behind his big brother Thomas Nee, his wife Evelyn and many nieces, nephews, and friends. Predeceased by his other siblings Joanne Matthews, Rosemary Pagel and John Nee.

Besides being with family, he loved to eat out, seafood and steak were among his favorites. He loved campfires, hunting, fishing, and card games especially during the Super Bowl.
He was an Army veteran during the Vietnam era, stationed in Germany where he met the love of his life. He had the gift of gab and should have run for political office. Instead, he was on the board for the West Broadway Task Force and volunteered for many campaigning events. He retired after many years of service from the City of Boston.
He will be missed but never forgotten.