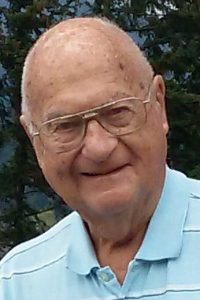 John (Jack) Olin Marshall passed away peacefully at home on September 8, 2022 at the age of 95. He was born in Santa Barbara, California to parents Olin and Leah Marshall on March 28, 1927, and when he was two the family moved to Camarillo, California. He attended elementary school in Camarillo, and graduated from Oxnard High School in 1945. Just before graduation he enlisted in the U.S. Navy, and served for the duration of World War II. He attended Ventura College, and Television Laboratory School in Hollywood, graduating at the top of his class as a television engineer. Although television was in its infancy jobs were not very plentiful, so he went to work at the Naval Air Missile Test Center at Point Mugu in October, 1950. He worked as an electronics engineer in the Launching Division of Range Operations Department, and retired from there in April, 1982.

In September, 1951 he and Frances Turner were married and had one daughter, Dina. He passed away just eight days before their 71st wedding anniversary. Through the years they enjoyed many camping trips, cross country car trips, activities with the Tri-Counties Sports Car Club, as well as get-togethers with family and dinner parties and board games (especially Trivial Pursuit) with friends. Jack was an active member of Ventura First United Methodist Church, where he served as an usher for many years and served several terms on the Board of Trustees. He volunteered with Family to Family for many years and did some volunteer work for Project Understanding in past years.

Jack was predeceased by his parents and his brother, Robert (Bob) and sister-in-law, Jean. He is survived by his wife, Frances, daughter, Dina Marshall Mikesell, grandson, Philip Mikesell, brother and sister-in-law, Gary and Charlotte Marshall of Orlando, FL, and several nieces and nephews. Our local nephew, Steve Marshall, and family have been so supportive! We know the others would be, also, if they were here. The family would like to thank Livingston Visiting Nurses Hospice workers for the wonderful help they gave us!

A private memorial service will be held at a later date. Memorial contributions may be made to Ventura First United Methodist Church.
Arrangements are under the direction of the BOYKO & REARDON TELEGRAPH ROAD MORTUARY & CREMATION, Ventura.