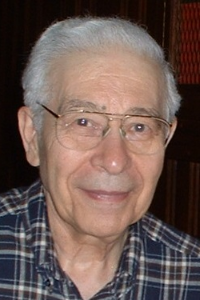 Joseph was born on December 25, 1925 in Lawrence, MA. son of the late Paul S Panto and Frances Pecorella.  After graduating from Lawrence High School, Joseph served as a Sergeant in the European theatre during World War II in General George S. Patton’s 3rd Army, 6th Armored Division, 9th Armored Infantry Battalion.  Joseph was a recipient of the Bronze Star for actions performed at the Battle of the Bulge. After V-Day, Joseph remained behind as part of the Army of Occupation in Germany.

After being honorably discharged, Joseph went on to receive his B.S. and M.S. in Textile Chemistry from Lowell Technological Institute (currently UMass Lowell) under the GI Bill.  Joseph was highly sought after by multiple companies and chose to work in the textile industry. In his professional career, which spanned over 40 years, Joseph holds over 20 patents spanning several countries, numerous publications, and is a recipient of the Chapin Award for Distinguished Service to the American Association of Textile Chemists and Colorists (1990).

Joseph was predeceased by his wife (Freda) of 64 years, and is survived by his two daughters, Leslie F. Bulriss and her husband Scott E. of Nashua, NH, and Paula P. Rose and her husband David A. of Brookline, NH. He is also survived by his brother Anthony Panto and his wife Barbara of Salem, NH, and many nieces and nephews. He was the brother of the late Rita Drury and her late husband William,

In lieu of flowers, expressions of sympathy may be made in Joseph’s memory to Disabled American Veterans (www.DAV.org).