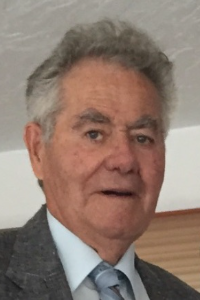 John Moniz, age 93, of Taunton, formerly of Norton, passed away peacefully on Wednesday, September 14, 2022 at The Arbors at Taunton. He was the beloved husband of the late Ilda (Silva) Moniz, to whom he was happily wed for sixty-one years at the time of her death on June 15, 2015.

Born in Madeira Island, Portugal on February 1, 1929, he was a loving son of the late Jose and Jesuina (Monteiro) Moniz.


John spent his early childhood living in Portugal. At the age of eight his family moved to Norton, where he was educated in Norton Schools. During the time of the Korean war, he proudly served his country as a member of the United States Airforce.


John was a well-known and respected businessman in the Norton Community and was the founder of Moniz Atlantic Service, a gas station on Mansfield Avenue in Norton which he successfully operated with the help of his family for over forty years. Along with his brother Manny, Mr. Moniz also ran the Greenhouse Market, located on Mansfield Avenue as well.

A resident of Taunton for the past fifty-four years, John’s family was the essence of his life and he especially enjoyed spending time with his brothers. He possessed many talents, enjoyed fishing and bowling and will always be remembered for his strong work ethics.

He is survived by his devoted sons: J. Michael Moniz of Assonet and Anthony P. Moniz of Taunton. He was the treasured grandfather of Jennifer Moniz of Tennessee and Jessica Moniz of Brighton. He was the dear brother of Mary Ribeiro of Wareham, Manuel Moniz and his wife Marie of Norton and the late Joseph Moniz, Jr. and Luiz Moniz. He is also survived by his loving nieces and nephews, including Liza Peterson


His Funeral Mass, to which relatives and friends are cordially invited to attend, will be celebrated on Wednesday, September 21st at 11:00 A.M. in Saint Mary’s Church, 1 Power Street, Norton. Burial will follow at the Timothy Plain Cemetery in Norton.


Visitation will be held prior to the Funeral Mass on Wednesday morning from 9:30-10:30 A.M. at the Norton Memorial Funeral Home, 19 Clapp Street (Off Route 140, Taunton Avenue) Norton.


To send his family a message of condolence, please visit www.nortonmemorial.com