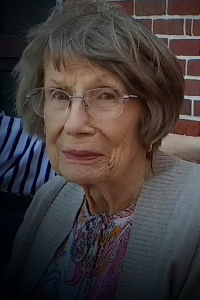 On September 13, in the year of our Lord, 2022, Martha Gaide (Trinka) died quietly at home surrounded by her loving family.

A lifelong resident of South Boston, Martha lovingly known as Marty, cherished her hometown and reveled in all the splendor it provided her, her family, and friends. She and her late husband were lifelong members of the South Boston Yacht Club. She was a dedicated leader for the local Girl Scouts. Following a natural desire to help others in need, Marty managed the Bayside Nursing Home for three decades before retiring and supported many Veteran Organizations. She was extremely proud of and faithful to the needs of her parish, Saint Brigid Church -- But Marty was most satisfied in life by ever-so-quietly and humbly serving her family and friends as a loving confidant and advocate for their every need.

Our Mom will be sadly missed but fondly remembered by her family and friends.
Visitation/Wake will be held on Thursday, September 15th, between 4:00 & 7:00 pm at Casper Funeral Home, 187 Dorchester Street, South Boston, MA. Visitation will also be at Saint Brigid Church on Friday, September 16th, at 10:30 am.

Funeral Mass will be held at 11:00 am on Friday, September 16th, at Saint Brigid Church, 841 East Broadway, South Boston, MA.

In lieu of flowers, her family respectfully requests that you donate to Special Olympics in memory of Martha’s beautiful son, Peter.