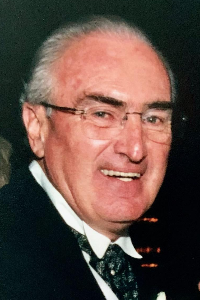 Paul graduated from St. Patrick’s High School in Watertown and received his bachelor of science degree in accounting from Boston College. Paul was a CPA and partner at Wolfe & Company in Boston for most of his career. Paul was very active in the local community particularly with St. Paul Church in Wellesley. Paul was a Deacon at St. Paul and he especially loved performing baptisms including those of his grandchildren. He enjoyed teaching adult candidates for the RCIA. Paul also ran the St. Paul CYO basketball league for many years. He coached youth football, basketball and baseball teams in Wellesley. He was a member of the Rotary Club and the Knights of Columbus. Paul was an avid golfer and long time member of Wellesley Country Club. He was a big fan of Boston sports teams especially the Patriots. Paul set a positive example for all who knew him with his honesty, integrity, concern for others and strong faith in God.

Visiting hours at the George F. Doherty & Sons Funeral Home, 477 Washington St., (Rt. 16) Wellesley, Friday, September 16th from 4-8 pm. Funeral from the funeral home on Saturday, September 17th at 9 am followed by a Funeral Mass in St. Paul Church, Wellesley at 10 am. Relatives and friends kindly invited. Interment in Woodlawn Cemetery, Wellesley. In lieu of flowers donations may be made in Paul’s memory to St. Paul Church, 502 Washington St., Wellesley, MA 02482.