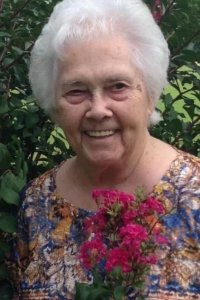 Jewell was born March 21, 1927, and along with her twin brother was born to her parents, Thomas and Cora Wright of Arkansas. In addition to her parents, she was also preceded in death by her husband, Gordon Durham; four brothers, Ewell, Henry, Tommy and Junior; and seven sisters, Faye, May, Lottie, Drennen, Mona, Odessa and Johnnie.

Jewell grew up in the small community of Needmore, Arkansas. She often told of her upbringing on the farm with her 11 brothers and sisters. She especially loved to tell how she and Junior loved playing in their yard’s Apple tree.

Jewell was saved at the age of 16 and was a member of Antioch Baptist Church in Sidney, Arkansas. After graduating high school, she moved to Little Rock, Arkansas to live with her sister, Odessa. While attending a church dinner with her Sunday School class, she met Gordon Durham and after three months of dating, the two were married on December 11, 1946. Together they raised four children, Paul, Becky, Deborah, and Mona.

Sister Durham was a faithful wife. She supported Brother Durham after he surrendered to the Gospel ministry. Their life and calling moved them from Arkansas, into Maryland, Kansas, Alabama, Florida, and Georgia. Sister Durham was also faithful to the churches of Georgia by leading out in the establishment of the Georgia State Ladies Auxiliary. She also was elected as the first President of this auxiliary.

She remained faithful to Brother Durham by caring for him as he was diagnosed with congestive heart failure until he went to be with the Lord on August 2, 1995. After his passing, she went back to work full-time at the age of sixty-nine and continued to be a faithful member of two sister churches in Florida. She served Greenville First Baptist, Greenville, Florida as a Sunday School teacher and piano player and she later served Capital Heights Baptist Church in Tallahassee, Florida.


At the age of seventy-four, she retired for the second time and moved to Jesup to help in the raising of her grandchildren. She stated, “I have been a pastor’s wife for years with four young children and I did not have much help. I want to be where I can help Mona with her young children while she helps Mark in ministry”.

In 2012, Jewell was diagnosed with Alzheimer’s disease. As dementia and memory loss developed, she continued to sing hymns, pray, and quote Bible verses.

While under Hospice care with Kindred Hospice from February 2020 until her death, she continued singing, reading scriptures, praying, and coloring. She was an inspiration to many of the Hospice staff and those who saw videos of her on Facebook.

Her favorite song was, “What A Day That Will Be”. Everyone who came to visit became an audience for her testimony in spirit and in song.

While many called her Sister Durham, or Ms. Durham, or even Sister Jewell, those who came around for a visit or two quickly learned to simply call her “Granny”.

Her prayer was that she would simply close her eyes and wake up in heaven. God heard her prayer and gracefully called her home on Monday, September 12, 2022.