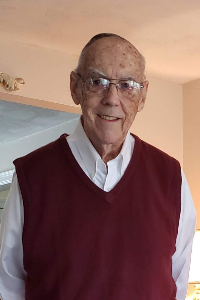 Roland was born in Lincoln, New Hampshire. He loved the outdoors, fishing, and hunting. At the age of 18 he left his hometown to search for new adventures and opportunities. This led to his voluntary enlistment in the U.S. Army. He was deployed to Korea after only completing half of the basic training program due to the escalating conflict. While in active combat in Korea, Roland was shot multiple times, earning him the Purple Heart medal. He was then shipped home to the Chelsea Naval Hospital and spent 18 months recovering there. This is where he would meet his future wife, Dolores, who was accompanying a friend that was visiting another soldier. Roland and Dolores met in September and were married 9 months later.

They moved to Belmont, MA and Roland then worked as a foreman at the Belmont Water Department for 40 years. Roland and Dolores had 2 daughters, Darlene and Lisa. Roland and Dolores eventually moved to Billerica, MA to be close to their two grandsons. Roland’s grandsons meant the world to him and he treasured the years of driving them back and forth to school each day. His family was very important to him and he lost his wife Dolores in 2021 after 69 years of marriage.

As a member of Billerica DAV Post 47, he served as a Chaplain. Roland also volunteered at the Bedford VA for several events. He made several close, life-long friends in the VFW and DAV.

Roland was loved and respected by many and will be missed by all that knew him.

Visitation will be held on Saturday, September 17th, 2022, from 10am to 12:00PM in the Burke-Magliozzi Funeral Home, 390 North Main Street, Andover. His funeral service will be celebrated at Noon. Relatives and friends are welcome to attend. Interment will be in the Fox Hill Cemetery, Billerica. For additional information please visit www.burkemagliozzi.com.

In lieu of flowers, donations may be made to the Alzheimers or to the Bedford VA