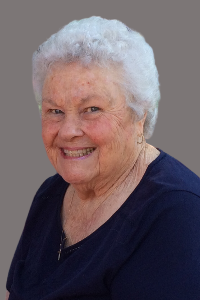 Genevieve “Genny” Laubacher Basso passed away unexpectedly Monday, September 5, 2022, at her home in Ventura, California. She was 91.
Genny was born March 20, 1931, in Oxnard, California to John and Florence Laubacher. She attended Santa Clara grammar school and Santa Clara High School in Oxnard.
Genny lived her entire life as a devout Catholic. She prayed the rosary daily and as a child, she dreamed of becoming a nun, joining the Sisters of Carondelet. She spent time on weekends as a pre-teen helping at the Santa Clara convent near her home doing laundry, making hosts, and other training jobs the Sisters had for her. Luckily for Steve and Michelle, Genny met the love of her life James “Jimmy” Basso as a freshman in High School. It has been told that on Jimmy’s first day of school, he saw Genny and leaned over to his best friend and said, “See that girl, I’m going to marry her someday.” They graduated together in the Class of 1949, and later married in 1953 on his 24-hour pass from the U.S. Army. Their marriage lasted 54 years until Jimmy’s passing in 2007.
Genny received her associate degree from Ventura College where she studied nursing. She received a degree in music, voice, and piano from Eberhardt Studio in Oxnard. For six years, Genny sang while accompanying herself on the church organ at Santa Clara Catholic Church. She also worked in sales at J.C. Penney in Oxnard while her husband was stationed overseas during the Korean Conflict.
Upon their move to Ventura, Genny and Jimmy were among the founding parishioners of Our Lady of the Assumption Catholic Church. Genny volunteered in many capacities, most notably as a CCD teacher and assistant to the director. Saturday mornings were spent cleaning the church altar and preparing linens with other members of the Rosary Altar Society.
Throughout her years, Genny volunteered whether it was the school PTA, team mom for sports, or serving hot lunch at her grandchildren’s school. In 2006, Jimmy and Genny were inducted into the St. Bonaventure High School Hall of Fame. Her biggest accomplishment of volunteerism, however, is the 56 years she gave to Community Memorial Hospital as a member of the Auxiliary. In 1964, she started in the labor and delivery department and was there for over 20 years before transferring to the front desk, where she remained until March 2020; the COVID-19 shutdown forced her into retirement.
Genny was very proud to be a member of one of the prominent farming families of Oxnard: The Laubachers. As the middle of three daughters, she became the “son” that her father never had. He taught her to drive the tractor and help plant row crops, along with many other aspects of ranch life. Her love of the soil carried into her adult life where she enjoyed tending to a beautiful home garden. In 1989, Jimmy and Genny purchased and took over the family business: Basso Distributing Company. After Jimmy’s passing, Genny served as President and CEO until the business and property were sold.
Genny was a voracious reader, often finishing several novels each month. She enjoyed watching Jeopardy and Wheel of Fortune nightly, but her greatest joy was spending time with her family as a loving and devoted mother, grandma, and “GG.”
She was preceded in death by her parents John and Florence, and her husband Jimmy.
Genny is survived by her son, Steven Basso of Camarillo; daughter, Michelle Hagemann (Ken) of Ventura; grandchildren Nicole Corral (Frank), Steven Ross Hagemann, and Andrea Hagemann, all of Ventura; and great-grandsons James, Landon, and Evan Corral.
She is also survived by her sisters, Rosemary Quilici of Campbell, California; Mildred “Mimi” Maring (Edward) of Patterson, California, along with numerous nieces, nephews, cousins, and friends.
Visitation will take place Friday, September 30, 2022, from 3:00 to 7:00 p.m. at Reardon Funeral Home located at 757 East Main Street in Ventura.
A Most Holy Rosary and Mass of Christian Burial will take place Saturday, October 1, 2022, at 9:00 a.m. at Our Lady of the Assumption Catholic Church located at 3175 Telegraph Road in Ventura. Burial will follow mass at Ivy Lawn Memorial Park at 5400 Valentine Road in Ventura.
In lieu of flowers, the family requests donations be made to: Our Lady of the Assumption School, Our Lady of the Assumption Church, or a favorite charity.
Arrangements are under the direction of the JOSEPH P. REARDON FUNERAL HOME & CREMATION SERVICE, Ventura.