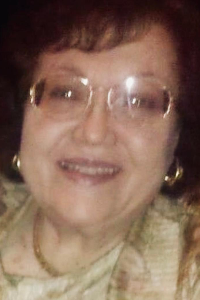 Lucille Roberta (Iovino) Marshall passed away on August 27, 2022 at the age of 85 in Henderson, Nevada where she resided for the past fifteen years.

Previously a life-long resident of Malden, Lucille was a well respected English teacher for forty years, beginning her career at Woburn High School and retiring after many decades teaching Honors English at Malden High School. Lucille based her own success as an educator on the accomplishments and achievements of her students, many of whom remained in contact throughout the years.

An educational advocate during her career, Lucille was active in the Massachusetts Teachers Association, and also in a number of civic and community organizations, including the Junior Aid Association of Malden. She was involved in many special events at Our Lady of Nazareth Academy during her daughter’s attendance. While living in Nevada, Lucille volunteered at a local Montessori school where she continued to spread her love of learning with elementary school children.

Lucille was raised in Malden, and graduated from Girls Catholic High School, as a member of the National Honor Society and Class Valedictorian. She was awarded a Bachelor’s Degree with Honors from Boston College, and a Masters Degrees from Suffolk University and Boston University.

Lucille was preceded in death by her beloved parents, the late Elizabeth Rose (Caruso) and Bernard A. Iovino, and her late sister Joyce L. (late husband, Carmen) Maresco. Lucille was the former wife of the late Anthony R. DiPietro, Esq. and widow of the late Arthur R. Marshall. She was the loving and devoted mother of Lucille R. (DiPietro-Star) Kramer, Esq. and her husband Douglas W. Kramer of Henderson, NV, and the proud grandmother of Ashley Nicole of Denver, CO.

Lucille is survived by her dear brother, Leonard V. Iovino (late wife, Joanne) of Malden; her beloved nieces and nephews, Michael A. and Kathleen Maresco of Marshfield, Dianne M. and John Adelizzi of Yarmouthport, and Joseph A. and Katie Iovino of Malden; and grand-nieces and nephews, Joseph and Maggie Rose Maresco of Marshfield, and Anthony Adelizzi of Yarmouthport.

Funeral Services will be held from the A. J. Spadafora Funeral Home, 865 Main Street, Malden on Friday, September 30th at 11am. Visitation will be from 9-11am prior to the service. Relatives and friends are respectfully invited to attend.
Interment will follow in Woodlawn Cemetery.