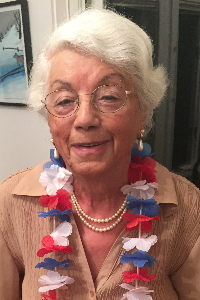 Parvin Zarrabi was born on October 2, 1930, in the port city of Bandar Pahlavi on the Caspian Sea. Her early childhood was spent by the sea and later at a family estate where despite protestations from a female relative, at the age of seven she copied her older brother, Aslan, and mounted a long stick pretending to ride a horse. She assumed girls could do anything boys could, and acted accordingly for the rest of her life.

After attending Shah-Dokht school for girls in Tehran, Parvin graduated from Tehran University School of Medicine in 1955, one of few women in a class of more than 200. During the tumultuous years surrounding the 1953 MI6/CIA-engineered coup d’état – which overthrew the democratically elected government of Prime Minster Mosadegh – Parvin became politically active. She participated in peaceful demonstrations, recited poems about freedom out loud at public gatherings and on the radio, dreamed of an Iran free of colonial influence, and fell in love with an older medical student, Nasrollah Saboori. They married in 1951 at her parents’ home. She wore a plain dress because she did not believe in extravagant weddings.

Although she was from a privileged family, Parvin understood the deplorable condition of the poor in her country. She not only wanted to heal her patients, but to improve the lives of all her fellow citizens, including those who had worked in the slave-like conditions imposed by the British in Iran’s oil industry. It was with this drive and idealism that she found herself attending a political gathering at the university in 1954, the year after the coup when the King had tightened control on the media and all forms of democratic expression. Agents of SAVAK, the Shah’s Intelligence Service, raided the university. Parvin and several of her medical school classmates were arrested. Years later, she would talk as if her brief time of sleeping on a cement floor, getting lice in her hair, and associating with cellmates who were thieves and street-workers was a kind of rough summer camp.

“We made friends, shared our food, and told them that their lot in life was not their fault. Society had put them there!” The essence of her belief was that all people have the potential to do right and succeed in life, if they are nourished to do so.

Forming a family meant an end to political activism. Therefore, instead of attending demonstrations Parvin dedicated herself to doctoring as the way to “Khetmat be mardom,” or serve the people. To her and Nasrollah this was a duty and one of the highest goals in life. And she set to it with determination. In the Oil Company city of Masjed Soleymon, Parvin became the head of the Public Health Clinic, Darmongah. She improved health care delivery for the poor, including those in the villages at the outskirts of the city and the nomadic tribes in the nearby mountains. She created a health care program for women street-workers and drug addicts. Parvin and her team also went door-to-door to promote childhood vaccinations, gaining the city the designation of first in the state. But she wanted to do more.

In the mid-1960s she returned to Tehran where despite initial opposition by all male physicians who told her “The protective lead apron is too heavy for a woman,” she persisted until she became the first woman radiologist in Iran in 1970, at a time when there were few female radiologists in the world.

After returning to Masjed Soleymon, Parvin worked as a radiologist and became the director of the Tuberculosis treatment center. She again went door-to-door, this time to convince patients to receive their TB treatments – an effort that would leave her with reactivation Tuberculosis in her old age. Additionally, she successfully campaigned for decent housing for lower-income city employees. Her efforts were noticed by the Shah who awarded her the prestigious Taj Medal in the early 1970s. Ironically this was the same king who had jailed her a few years earlier.

Beside her work, during the 1960’s and ‘70s Parvin and her husband, Nasrollah raised a son and daughter. They shared their appreciation for the beauty of nature with family walks amongst the red tulip-covered mountains of MasjedSoleymon and picnics near the snow-melt-cold Tembi river. They taught the children the love of reading and the joys of a good discussion sitting around the table, peppered with humor and laughter. They both believed in the importance of education.

After the Iranian Revolution of 1979, although their children were by then studying in the U.S., Parvin and Nasrollah chose to continue to stay in Iran to serve the people. After her husband’s death in 1986, she continued to work. Along with her regular job in central Tehran, she attended a clinic in the poorest neighborhood South of the city. She finally retired at age 72 when she was “too tired of seeing so many advanced cases, because people don’t have money for the doctor!” Parvin comprehended long ago what today we understand as social determinants of health.

Parvin stayed in Iran for some time after her husband’s death and her own retirement. During those years she was the matriarch of the family, giving advice and counsel to the adults, and acting as an aunt and a grandmotherly figure to her many nieces and nephews.

In her early 80’s she moved to the U.S. to be near her children and became a U.S. citizen a few years later. On her citizenship swearing-in day, she proudly wore U.S. flag earrings, but joked with an impish smile that she had not yet forgiven the CIA for the 1953 coup d’état. Throughout her life, even before becoming an American, Parvin believed in the unalienable rights of all human beings, to have equality, freedom, and the right to speak up in the face of injustice.

Parvin Zarrabi died peacefully in her bed, on August 19, 2022 due to complications from a stroke.

She is pre-deceased by her husband, Dr. Nasrollah Saboori, and her brothers, Drs. Aslan and Yousef Zarrabi. She is survived by her siblings, Professor Tirdad Zarrabi, Soheyla Sheybani, and Dr. Kaveh Zarrabi; her children, Drs. Mehran and Shiva Saboori; and her grandchildren, Bijan Saboori and Darya Lee.

In lieu of flowers send donations to Amnesty International, www.amnestyusa.org/donate