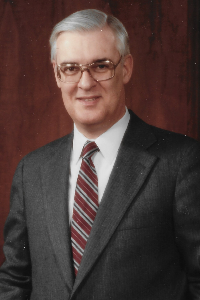 Jim, as he was known to family and friends, was born in Boston in October of 1938, the firstborn child of James Conley and Eleanore Lewis Conley. A graduate of Northeastern University, he spent his entire career with Ernst & Young, an international accounting firm. He was named a partner in 1972 and served as a Regional Director of Accounting and Auditing in Boston, Cleveland and Atlanta.

Jim was a past member of Braeburn Country Club, The Algonquin Club of Boston and the Boston Chapter of the National Association of Accountants, which he served as President. He was a devoted, lifelong Red Sox fan, an avid world traveler and a perennial student, enrolling in many educational programs during his retirement years. Jim’s greatest devotion, however, was to his family, especially his wife and son. Jim was a man of integrity and high moral character. Possessing a well-developed sense of humor, he smiled his way through life and loved to recount light-hearted stories with friends and family. Many will miss his intelligent, warm and friendly presence, especially his wife, who will always love him dearly.