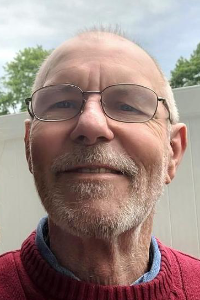 Frank A. McAnulty 72, of Franklin, passed away suddenly at his home, Sunday September 11, 2022. He was the beloved husband of Joan M. (Barlow) McAnulty, with whom he shared 42 years of marriage.

Born February 21, 1950, in Framingham, a son of the late Frank A. McAnulty, Sr. and Florence (Smith) McAnulty, he was a former resident of Framingham before moving to Franklin in 1979.

He was raised and educated in Framingham, and was a graduate of Framingham North High School. He continued his education at Bentley College, where he received a bachelor’s degree in accounting.

Frank worked in banking and finance for Suburban Credit Union for many years. He also started his own landscaping company as well as being a framer for a local construction company.

He enjoyed spending time with his family, his dogs and playing golf.

In addition to his wife, he is survived by his children, Jamie R. McAnulty of Bellingham and Justine C. Houston and her husband Max of Blackstone.

Private services will be held at a later date.

Donations in his memory may be sent to a charity of one’s choice.