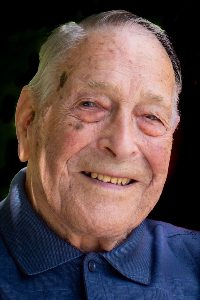 Walter Joseph Zinchuk 105, Franklin’s oldest resident passed away peacefully in his sleep in his residence in Franklin, MA on September 11, 2022, after living a very full and productive life. He was born on July 19, 1917 to Zinovy ‘Joseph’ Zinchuk and Maria (Fedoruk) Zinchuk in Haverhill, MA.

Walter was pre-deceased by his sister, Sonia Landry, and his brothers. Steven Zinchuk and Peter Zinchuk. He is also survived by fourteen grandchildren, and eleven great-grandchildren, countless nieces, nephews, and grand nieces and nephews.

Walter spent much of his young life in Maine, either working on the family farm, or working for the lumber company in Northern Maine. He was inducted into the Army in January 1942 and served his country during World War II in the Pacific campaign, serving much of his time in Papua, New Guinea. He achieved the rank of Technician Grade 5. He was awarded the Army’s Silver Star for Gallantry in Action, when he saved his squad from an enemy ambush.

He contracted malaria in New Guinea and after several months of convalescent care, received an honorable discharge in 1944. He enrolled in the University of Maine, in Orono, where he met the love of his life. Walter and Alta were married in 1948, and Walter graduated with a Bachelor’s degree in Electrical Engineering in 1949 and welcomed his first child into the world that same year. Walter started working for the Mass Electric Company in 1949 and eventually settled in Franklin, MA in 1958, where he lived for the rest of his life, where he and Alta raised their family. Walter enjoyed golfing, skiing, and wood working during his leisure time. He continued to work for Mass Electric Company until 1987 when he retired for the first time. He was enticed out of retirement and worked for the US Navy, upgrading their electrical power grid at the Newport RI Navy base.

Walter was active in the Franklin community being a member of the Lions Club and Knights of Columbus and serving as a Eucharistic minister at his home parish of St. Mary’s. He stayed active in his retirement years, serving on several committees for the town and eventually working for the Franklin DPW an engineering aide, when he finally retired for the third time in 2006 at the age of 88. He was also a volunteer driver for ‘Meals on Wheels’ and worked at the senior center preparing tax returns for his fellow town residents.

Walter moved into the Benchmark Assisted Living facility at Forge Hill in Franklin in 2017 where he has resided for the past five years. Walter was honored by the Franklin Town Council in March 2020, as being Franklin’s oldest resident and was presented with the Boston Post Cane. He enjoyed his remaining years at Benchmark playing various card games, Pokeno, poker, crafts and chair volleyball. He will be greatly missed by his loving family members and many friends.

Relatives and friends are invited to attend his funeral Mass at St Mary’s Church in Franklin on Friday, September 16, at 10 am.

Interment with military honors will follow at St. Mary’s Cemetery.